Wake Me When It’s Over

Wake Me When It’s Over 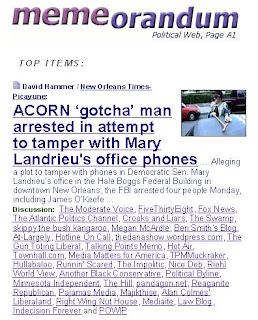 We had Virginia, New Jersey and Massachusetts.

They now have the doofus triplets committing the sin of felony all over Mary Landrieu’s phone.

Thanks for giving comfort to the enemies of my enemies who therefore are my friends, just when they had nothing to look forward to except the faint glow of reconciliation flickering on the horizon like a candle in the wind, or something.

Thanks for nothing, geniuses.

You deserve what you get.

(Screen shot via Memeorandum)
Update 1-28-2010: Various accounts are suggesting that the motive was to document that Landrieu’s office had disabled or otherwise was not answering its phones so as not to receive hostile calls regarding health care legislation. The intial report by The Washington Post that this was an attempt to ‘bug” the offices has been withdrawn.
It remains to be seen what exactly was the crime involved, but it does not change the stupidity of the alleged “sting” operation, which at best was seeking to prove something (that Landrieu was ignoring phone calls) which could have been shown through other means, and at worst was a criminal act. The political damage has been done.
Update 1-29-2010: James O’Keefe now has issued an explanation, which does not change my view of the incident (emphasis mine):

I learned from a number of sources that many of Senator Landrieu’s constituents were having trouble getting through to her office to tell her that they didn’t want her taking millions of federal dollars in exchange for her vote on the healthcare bill. When asked about this, Senator Landrieu’s explanation was that, “Our lines have been jammed for weeks.” I decided to investigate why a representative of the people would be out of touch with her constituents for “weeks” because her phones were broken. In investigating this matter, we decided to visit Senator Landrieu’s district office – the people’s office – to ask the staff if their phones were working.
On reflection, I could have used a different approach to this investigation, particularly given the sensitivities that people understandably have about security in a federal building. The sole intent of our investigation was to determine whether or not Senator Landrieu was purposely trying to avoid constituents who were calling to register their views to her as their Senator. We video taped the entire visit, the government has those tapes, and I’m eager for them to be released because they refute the false claims being repeated by much of the mainstream media.

I thought only libs practiced guilt before proven innocent? My mistake…

Let's wait a few days before passing judgment. If they were bugging the Mary's phones, that's one thing. But it's possible that they walked in with bugs and cameras on their bodies as they did with Acorn. Would this be illegal? Would it be illegal if 60 minutes did it? Maybe this is entrapment?

@ecm @freddyhill, fair enough they have not been convicted of a crime, and it remains to be seen what crime is proven, but regardless, messing with a Senator's phones, for whatever reason, likely was criminal and at a minimum was profoundly stupid; the damage is done.

I'm having a very hard time with this one, not because I am grateful for his exposure of Acorn and consider his "good" actions as an excuse for "bad" actions (I don't), but because this just doesn't make sense at this time. Considering that O'Keefe is facing two lawsuits for his alleged illegal videotaping in two other states (PA and MD), it makes no sense that he would then turn around and do something so obviously stupid and so blatantly obvious to any witnesses…. maybe there is more to this than the media is spouting right now. His remarks to the press, "veritas", and another of the four's response "the truth will see me free", after they were leaving the courthouse, are so incredibly strange unless they have something that they have not yet revealed.

I'm waiting this one out before I pass judgement or make comments. I need to see how this plays out first.

And, this I find curious…. why Landrieu's office? What's he got or what does he know that would make him do this? He wouldn't just randomly pick any Senator's office to do this in….. would he? Can anyone be that stupid?Doesn't it make more sense that he was doing this because of some kind of information received prior to going to her office? Again, I just have too many questions and not enough information to be able to call him an idiot, a fool, a criminal, or a man who is willing to risk everything to expose a truth. I just can't know right now.

Well, we'll see how this goes. I can only hope that there ends up a "good" reason for this and that he doesn't end up facing prison because of hubris or foolishness. That would be a shame.

Nah, Jacobson's first take on this is accurate, I'm afraid. Did you read the FBI report? It wasn't made up or fudged in any way. The kid got a nose full of Libertarian testosterone I think, and decided to go all Anthony Pellicano…

Bad news, and sure to get worse.

ACORN's nominal headquarters are/were in New Orleans…Was he following some lead about a connection between Louisiana's senator and ACORN?

Who knows…but I'm willing to give him the benefit of the doubt until we hear more. I would hope there's a sufficient defense, but it had better be a real doozy if he's going to get sympathy from me.

i was going to post a link that Patterico found where the good Senator had evidently scragged her phones so no one could call in, but i can't paste anything here.

i think a good dose of scepticism towards these charges in in order. if they broke the law, hell yes, charge them, but what if their only *real* crime is embarrassing the senator and/or other people in the building?

at the very least, we should invoke the 48 hour law, and give the whole thing time to sort itself out.

I agree we should withhold judgment about this until we get a little more information. Remember he could have been arrested for "pimping" at a prior time.

“We were stunned to learn that so many phone calls to Sen. Landrieu have been unanswered and met with continuous busy signals,” Perkins said. “We asked them to call their senators. They could get through to Sen. Vitter, but not Sen. Landrieu.”

“Our lines have been jammed for weeks, and I apologize,” Landrieu said in interview after giving a speech on the Senate floor Tuesday. “But no amount of jamming is going to keep me from supporting a good work for Louisiana and the nation.”

Initially I was like, Oh no! idiots! but after thinking about it for a day, I think they knew what they were doing – something for a reason, I mean. Isn't one of the kids the son of the sitting DA? I think they were maybe trying to prove that they were ignoring the phones or something. Who knows. I am not for breaking the law, but I want to know what was their agenda.

But, I agree that they stole the thunder the Right was making and now everyone is slobbering over this story.

As a citizen of Louisisna, I think that they were trying to find out why Mary does not answer her phone. This woman will not communicate with anyone in our state, even the press.

I'm on the wait and see side — particularly since the FBI/DOJ are all over O'Keefe but do nothing about ACORN. I recommend Three Felonies a Day to Prof. Jacobson [see http://www.amazon.com/Three-Felonies-Day-Target-Innocent/dp/1594032556 and http://www.threefeloniesaday.com ]

Hmmm . . . yes, I agree that we should wait and see, but I am also in full agreement with this post as it stands (how's that for waffling?). What possible (aboveboard) reason could they have for snooping around that office in disguise?

I can't agree with the full extent of your claim for political damage. Whatever damage was done, may have been compensated in part by the exposure of the MSM's bias and double standard–again and in a very obvious manner. I am largely in agreement with Kyle-Anne Shiver's argument up since yesterday at bigjournalism.com. In a related and very remarkable manner Retracto, the Correction Alpaca has issued a large number of posts at bigjournalsism asking for corrections/retractions from specific MSM outlets and left blogs, and he has been given some, for the inaccurate reporting in the rush to judgement of O'Keefe. Erick Erickson at RedState also posted yesterday on some cautions for rush to judgement on the right in the O'Keefe case (as an intro to O'Keefe's statement).