The People Are On The Phone

The People Are On The Phone 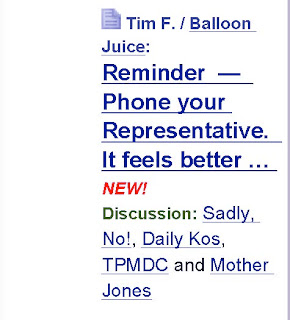 Sometimes a Memeorandum thread almost speaks for itself.

In this case, the push launched by Balloon-Juice, Sadly No, Daily Kos and others to demand that the House pass the lousy and unpopular Senate bill as is.

With backers like these, Democrats have nothing to worry about.

Democrats, particularly those in swing districts and red districts, will not hesitate to jump off the political bridge because their office received phone calls from people who hate the Senate bill but want it passed anyway.

And a massive restructuring of the nation’s health care system, including mandates, taxes, trillion dollar spending, and dozens of new bureaucracies, is an idea around which the nation is prepared to rally.

and yet, OhBambi called to continue the fight for nationalized healthcare today in Ohio. Yeah, smart move there, Mr. Community Organizer!

I cannot believe the self-delusion of these people. Everyone in the House of Representatives – everyone – has to face the voters in ten months. Under what alternate reality do these bloggers believe those Reps are going to commit political suicide by passing a largely unpopular bill?

Also, one of the major themes to come out of the Brown election is that MA voters wanted to "send a message" about the process in Washington. A move to ram it through just reinforces the voter's disgust.

Ah, yes, January 19th, 2010. The day that changed everything again. The day that truck driver (well, not really; he drives a pick-up truck, not an 18-wheeler) Scott Brown, the god from God, won a special election to the Senate (good on him) vowing to be the 41st something or other (presumably the 41st vote against the Senate HCR bill, which is a little weird because he voted for the universal healthcare coverage enjoyed by the citizens of his great state but this time it's like totally different) and also vowing that he supports everyone having healthcare. Plus abortions.

This is gonna be fun.

Thank you for censoring me.

No threats, no profanity, just the analog in text of the exact same viscerally comforting memetic boilerplate that the Bush-Cheney-Rove junta peddled for most of the last decade … so (as your reaction to my comment indicated with such crystalline clarity) if you can't swallow back what you perennially dish out, what exactly does this tell you about yourself?

@Jim is just doing more trolling. Here's how he joked about his removed post at Sadly No (before it was removed):

Someone, stop me, please, before I troll again!"