The Great Deception of 2008

The Great Deception of 2008

Posted by William A. Jacobson Thursday, January 7, 2010 at 11:45am 6 Comments
More Sharing Options

What is wrong with this picture: We have the most liberal Congress and President ever, who are pushing an equally liberal agenda, yet the country is more conservative than in recent history.

Gallup has released its 1992-2009 survey of political self-identification, and the result is that people identifying themselves as conservative has risen dramatically since Obama took office: 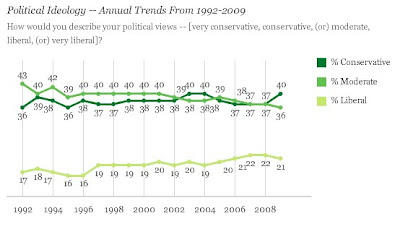 Gallup explains this trend as follows:

The increased conservatism that Gallup first identified among Americans last June persisted throughout the year, so that the final year-end political ideology figures confirm Gallup’s initial reporting: conservatives (40%) outnumbered both moderates (36%) and liberals (21%) across the nation in 2009….

The rather abrupt three-point increase between 2008 and 2009 in the percentage of Americans calling themselves conservative is largely owing to an increase — from 30% to 35% — in the percentage of political independents adopting the label. Over the same period, there was only a slight increase in professed conservatism among Republicans (from 70% to 71%) and no change among Democrats (at 21%).

America was hoodwinked in 2008 by a presidential candidate who faked a move to the right to set himself up for a hard move to the left. The C-Span broken promise is just the latest example.

And it all was made possible by a dishonest mainstream media invested in promoting a political candidate instead of reporting and investigating. And who spun the election as a mandate to move the country to the left, when in fact there was no such mandate.

The Great Deception of 2008 is not water under the bridge. And it shouldn’t be treated as such.

——————————————–
Related Posts:
Is Obama Head Faking Right, While Driving Left?
So What Should I Call This?
Obama and Rahm Emanuel: When Will You Stop Being Surprised?

Linked at the Left Coast Rebel William. Have a great day!

Let's not forget that the GOP offered a Democrat wannabe as the alternative and the party continues to insist that the "big tent" needs to move to the left. The same guys are still in charge of the GOP.

If 2010 is going to be a good year for Republicans, the party has to clean house and soon. The other team really sucks but "our team" is just as bad.

Total head fake, by both Obama and the media. Your post from 2008 was prescient. Unfortunately, your predictions underestimated the leftist extremism of this administration.

Wit he Tea Party America may once again have a conservative party to represent the majority of Americans. Along with the 2 left wing parties that keep getting elected despite representing less than a third of us.

The line to remember:
Excellent analysis as always Professor.

Well you know, this surprising Conservative news parallels that of the President about al Qaeda in Arabian Peninsula: he knew they were doing aspirational planning but he was unaware they were able to launch an attack.

So Conservatives are ready to launch their 2010 campaign. Democratic intelligence gatherers just don't know what to make of thee dots.