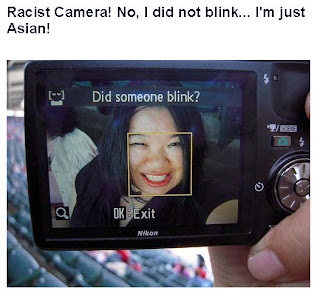 This is the latest in the Saturday Night Card Game series on the use of the race card for political gain:

A follow up to the “technology is racist” twist explored in the last of the series, HP Face Tracking Software Racist?
Now, it’s Nikon’s photo correction technology, which allegedly has difficulty with with Asian faces, leading to this post:

We got our Mom a new Nikon S630 digital camera for Mother’s Day and Iwas playing with it during the Angels game we were at on Sunday.As I was taking pictures of my family, it kept asking “Did someoneblink?” even though our eyes were always open. Sheesh! RACIST! 😛

The post was the subject of a Time magazine story, and now has gone viral.
As with the HP facial recognition technology, there is nothing “racist” about facial recognition technology just because it may not be as effective with some faces or in some lighting conditions.
People really need to stop throwing around the word “racist,” which has been cheapened beyond meaning because it is overused (which is the point of this series).
And yes, it’s that Nikon, the one from Japan. If anyone has anti-Asian animus, it’s likely to be a Japanese company, right?
——————————————–
Related Post:
Saturday Night Card Game Series
Follow me on Twitter and Facebook

This is hilarious as is the Time article.

"I think my blackness is interfering with the computer's ability to follow me," the black employee jokingly concludes in the video. "Hewlett-Packard computers are racist."