Scott Brown’s Money Bomb is today. The special election is a week from tomorrow.

If you’ve read this blog, you know that there is a chance of victory for Brown if he keeps surging. But he needs money to do that. A Scott Brown victory may be the last chance to stop the people in the photo below from doing to our health care system what they did to the banking system and housing market.

Tomorrow Martha Coakley flies to Washington, D.C. to raise money for her campaign from 17 corporate lobbyists, 15 of whom represent clients who cut private deals to support Obamacare.

How laughable to hear the ignorant “progressives” at MoveOn.Org, DailyKos and elsewhere rally around Coakley even though she is beholden to the very people who sold out the progressive movement on health care reform.

What happened to the outrage over Coakley’s “bait and switch” on opposing the Senate bill during the Massachusetts Democratic primary? Why the silence from Jane Hamsher and other progressives who want to kill the Senate bill, but are unwilling to do the one thing which actually could work?

Today is your chance to stop the runaway train in Washington, D.C. Just do it. 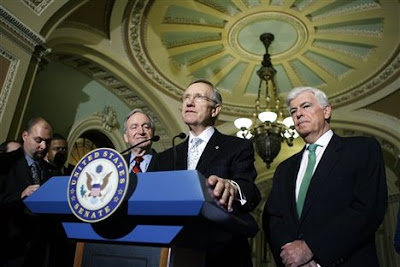 Update: Embedded below is the invitation to Coakley’s lobbyist fundraiser tomorrow (via Big Gov’t).

Who is on the list? None other than Jamie Gorelick, the “Mistress of Disaster” responsible strenthening the wall between intelligence services and law enforcement which contributed to the systemic failure to detect the 9/11 plot, and former Vice Chair of Fannie Mae. Coakley will raise hundreds of thousands of dollars from these lobbyists, including grouped contributions.

If Brown wins, how do you propose to short circuit their delay tactics with certification? I've read that "many states" that the term of an appointed Senator expire immediately upon a special election being held. Would if possible to file a motion to force Kirk out, thus depriving them of a 60th vote?

Donated, and watching the tally grow 🙂

I have donated too and am directing my readers to do the same. Thank you for being such a consistent voice.

The Republicans are really hobbled in this race because, even though they controlled the Governor's mansion for 12 years, they never built up the local party organizations around the state. Traditionally, that's the foundation of a truly effective GOTV operation.

I plan to stop by the local Scott Brown office in my home town after work tonight to write a check toward the Money Bomb ($41.00 = 41st vote!) I'm going to stick around and make some phone calls for Scott, too! From this MA voter: thank you LI and the entire conservative blogosphere for getting behind Scott Brown and giving us hope!

I've donated online but would like to know the address of the headquarters. I'd like send the volunteers a pizza or sandwiches or something this week.

In 2007, Niki Tsongas was sworn in as U.S. Representative from Mass. just two days after winning her election – just in time to override a Bush veto of the expansion of SCHIP. If Scott wins and they use the delaying tactics, Mass. voters will see through the B.S. excuses.

I have never donated to a political campaign in all my 35 years but I did today! Wouldn't that just beat all if a Republican won the seat that has been held by the Kennedy Co. from time immemorial?! Hope really is on the way!

Mark …> you're a Patriot! I'm organizing a drive in the office. We're emptying our wallets today. I rather give generously to a righteous cause than pay dearly later for Obamacare…

Interesting that Charlie Ergen, the CEO of Dish Network, is supporting Coakley.

Perhaps everyone with Dish Network who is upset with Washington should consider cancelling their Dish Network service for a month, today, and telling the customer service folks why.

nice try you concern troll. From what I have seen the Republicans are far from hobbled. There are a lot of Independents and yes there are Dem voters who will not be voting for Coakley.

Your tactic has not worked and you can tell your employer that you do not deserve to be paid for your little bit of Astroturfing and trolling…. now go away….

I contributed just now. I think the total was already over $800,000. Second time in my life I ever have.