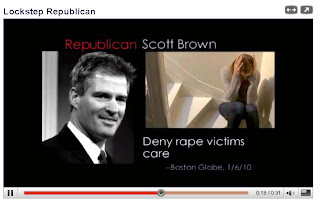 In fact, Brown merely proposed a religious exemption which would exempt those with a religious belief against providing “emergency contraception” (the so-called “morning after pill” which prevents pregnancy) from having to do so provided they had a plan in place for the victim to get the contraception elsewhere at no extra cost.

If Coakley thinks this amounts to denying care to rape victims, then she needs to explain why she supports the Senate health care bill which has an even broader religious and “moral” exemption for abortions, even in the case of rape.

Here is the language proposed by Brown (h/t Ruby Slippers) with regard to whether a health care provider or hospital must provide emergency contraception (emphasis mine):

If it is deemed that said employee, physician or nurse of any facility has a sincerely held religious conflict administering the contraception, then said treating facility shall have in place a validated referral procedure policy for referring patients for administration of the emergency contraception that will administer the emergency contraception, which may include a contract with another facility. The referrals shall be made at no additional cost to the patient.

Brown ended up voting for the legislation even without this amendment.

Here is the language in section 1302(a)(3) of the bill (at page 125) passed by the Senate on December 24 (emphasis mine), which Coakley says she supports:

PROVIDER CONSCIENCE PROTECTIONS.—No individual health care provider or health care facility may be discriminated against because of a willingness or an unwillingness, if doing so is contrary to the religious or moral beliefs of the provider or facility, to provide, pay for, provide coverage of, or refer for abortions.

The Senate language will provide protection for hospitals and doctors who, due to religious or moral beliefs (a broader exemption than Brown’s “religious beliefs” standard), refuse to provide abortions. This language is broad enough to provide an exemption even in the case of rape victims. This language also is not dependent upon whether the abortion service otherwise is allowed under the Hyde Amendment regarding federal funding of abortions.

Since Martha Coakley supports the Senate bill, does this mean Coakley wants to deny care to rape victims?

Update: This Photo May Change The Election

She was way out of line last night about that and in this ad. I wish Scott had better explained it, but that's why we have amazing bloggers like you to clear this up! 🙂

I saw that ad this morning and I was sure that part was bogus. After all, what politician would ever take a stand to deny care to rape victims? Talk about political suicide.

Thanks for the explanation.

Suppose they'll still "walk the plank" for her?

Cross-blogged at http://www.repubx.com – the first in news and home to IntelliFetch Search – no censorship or political agenda link promotion or keeping your search history (i.e. Google) ..try it!

Interesting link from RightKlik…about Coakley's direct mishandling of the Keith Winfield rape case. What a stupid gamble for Coakley's campaign managers to run an ad that not only has no basis but is potentially self-incriminating (if Scott's campaign choose to bring up Keith Winfield as a rebuttal).

How poignant that this fight is happening in Massachusetts. It's 1774 again! Press on Scott!

The other issue Coakley should answer for is her treatment of rape cases as a prosecutor when the victim is an infant or male.

So the ad is completely factual on this issue. I don't know what your problem is. If republican's insist on making abortion and not the economy their top issue that is going to turn some voters off.

If someone doesn't wish to be in the business of providing medical care to rape victims then they should not be in the business. Either that or make someone else available at all time who is wiling to provide the care.

Oh, Brian. Tsk, Tsk, Tsk. The ad isn't completely factual at all. It's more of the same hype, bluster, obscuration, and misdirection that citizens so frequently see in political ads.

And as for your last paragraph, well, you're indulging in the same misdirection as the ad, so you must be very proud of yourself. Particularly, since the very last sentence of your post is EXACTLY what Brown is proposing with his "validated referral procedure".

The ad is crap served on a platter of misdirection. Pull up a chair and get out your spoon, Brian, you're in for a long meal if Martha gets elected.

Basic reading comprehension. Does that read like denying medical care to rape victims? The ad is NOT factual because it did not excerpt the complete language in the bill.

I'm pro-choice and Scott hasn't been running an anti-abortion platform. It's Coakley who's making this the focus of her campaign. Coakley's no Jeanine Pirro. The botched Winfield case points to Coakley as the real menace to rape victims.

this is not about emergency contraception, it is about giving a pill to induce abortion.

Catholics can give number one, but not number two.

A rape victim who comes to the emergency room, has a negative pregnancy test, and is immediately treated can be given the medicine to stop ovulation.

A "rape" victim who comes in four days later will not, since she could be four days pregnant.

I don't understand how you see Coakley's accusation (and I do hate her negative campaigning) as being inaccurate. He clearly sponsored an amendment that would deny a rape victim emergency contraception. To some people this is considered abortion. I know this is a hot topic, but are you saying you're in favor of forcing rape victims to bear the rapist's child?