Dems Are The New MySpace

Dems Are The New MySpace 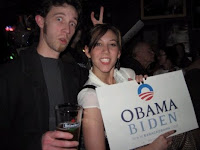 Enthusiasm among the youth of America for the Democratic Party is vanishing almost as quickly as their MySpace accounts in the age of Facebook:

It appears there is a potentially huge problem for Democrats going into the 2010 election cycle: young people simply are not voting. Part of Martha Coakley’s problem in Massachusetts was the incredibly low turnout among voters between 18-29….

No one could have seen this coming.

One odd aspect to the MA situation, though: Many colleges in the state were still out of session on election day, returning to class the next Monday.

A bad year for the Democrat party is a good year for life, liberty and the pursuit of happiness!

It's that roughly 20,000 hours of actual work they're missing, which deprives them of the genuine sense of loss one feels when the government touches you, particularly in the regions near your intellect and your wallet.