Martha Coakley flopping gaffe of the day, as reported by the Boston Herald:

Shipping giant UPS isn’t amused by a Democratic Party campaign pamphlet attacking Republican Senate candidate Scott Brown that plays off the company’s slogan “What can Brown do for you?”

Atlanta-based United Parcel Service, known for its ubiquitous brown trucks, demanded yesterday that the Massachusetts Democratic Party, which is listed as paying for the pamphlet, stop distributing it.

The mailer asks “What can Brown do to you?” It shows Scott Brown dressed up as a UPS driver and says, “He can reward corporations that ship your job overseas just like George W. Bush.”

Here is an image of one of the actual mailers: 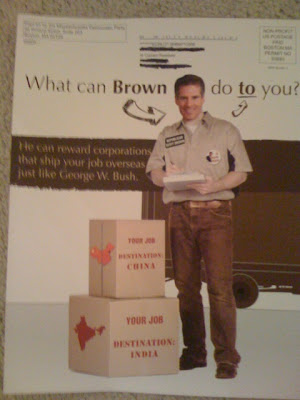 THANK YOU for posting this! Keep up the great work!!

If ONLY they'd sue. I'm really getting angry at the vile tactics she is using and the lies, outright LIES, she is saying about Brown and his record. Sadly, a lot of people up here would believe he has horns and a tail simply because of the (R) and because she told them so. She's seriously unprincipled and nasty.

I just hope that the majority of Massachusetts' citizens are intelligent enough to see through the garbage. But some don't. I've seen comments on blogs and vids that Scott represents "millionaires" while the dem party is the working man's party. How many decades has it been since that was the case? Or even close to it? And how much did Coakley raise in DC from lobbyists and special interests while Brown raised small amounts from real people, working people. It's sickening how brain-washed and uninformed these people are.

Croakely. At it again.
So what's next for Ms. frog legs?

"Unprincipled and nasty," Fuzzy Slippers? She's a female democrat. Is there ANY OTHER KIND?

This is priceless, she steps in it every move she makes.

They are running out of tactics..ACORN would be a stretch with the publicity, Black Panther poll intimidation is "so 2008"; maybe they can try mass election machine failure again, or bus in thousands of SEIU members to vote in place of residents that just will not become Obots?? Seems that letting Coakley talk with out the "Obama approved TelePrompter" is not the answer!

My favorites are the ones saying that Brown would be beholden to the pharma and insurance companies AFTER Coakley was just at a fundraiser with their lobbyists.

This woman is a joke. I sincerely hope she loses, but we can't get complacent. The corrupt and dirty Dem machine is still very much there.

I spent time at some of the Mass. paper sites. Most of the comments were leaning towards Brown. There were a few very obvious Dem operatives making comments about Brown and trying to cover for Coakley. Mostly they failed.

I am not sure about the effect of the eeyores and concern trolls or the purists. I saw one person saying he would not vote, but it seems no one is really listening to the purists.

Most of the obvious ploys are truly failing and I think it is because of her record as a DA and AG. She has not been upholding the law because she has been compromised by her desire to have a political career.

The case that seems to be sinking in the most is the one involving the little girl where she failed to prosecute. What is worse she tried to push blame onto the mother in more recent comments. At the time she actually blamed the family's lawyer for trying to push the case as a career move, but as the brother says…. he only went against Coakley because she failed to prosecute this particular case – because the perpetrator's father was one of her campaign donors.

Curling-Iron Coakley is getting very desperate.

As opposed to job creation machine called the Obama administration.

Hey, now we can see where all those "SHOVEL READY"
JOBS are!!!

"Joke-ley" and her campaign brainiacs needed all the shovels in Mazzachoossettes (sic / sarc)
to help them dig their own hole!

That flyer looks like it was done in MS Paint for a 7th grade class project. Which makes sense, since Coakley's campaign is about as professional as a run for 7th grade student council.

Mrs.Coakley should have waited until the day before the election before the Brown is for rape ad.
Scott had a chance to refute it with his criminal charges against the Democratic Party.