Coakley Glances at Her Watch – For Six Days

Coakley Glances at Her Watch – For Six Days

The audacity of Martha Coakley taking a vacation for six days just three weeks before the Massachusetts special Senate election has had me searching for an historical political equivalent.

Mike Dukakis riding on the tank? Nah. That imagery showed Dukakis to be someone who cared so much that he had to pretend to be something he wasn’t.

John Kerry windsurfing or crawling out of a space capsule in a bunny-ish suit? Nah. Those images conveyed a certain foolish quality, but not because Kerry couldn’t care less.

Al Gore’s clearly audible sighs and visible rolling of his eyes on stage during the debate with George W. Bush? Nah. At least Gore was paying attention.

The image that most comes to mind is George H.W. Bush during a townhall-style debate with Bill Clinton and Ross Perot in 1992, when Bush glanced at his watch to check how much time was left.

The fleeting image of a politician convinced that he had something better to do than talk to the voters was extremely damaging to Bush’s re-election campaign.

We’ll see how voters in Massachusetts react this time around to a politician who glanced at her watch, for six days. 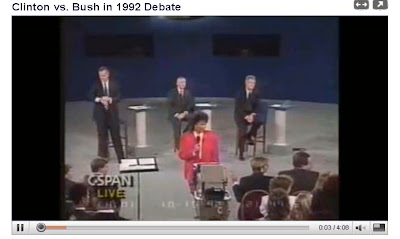 Earthquake Rumblings In MA – Rasmussen Shows Brown Within 9% / Update: Brown within 2% With Definite Voters and Leads By 44% With Independents