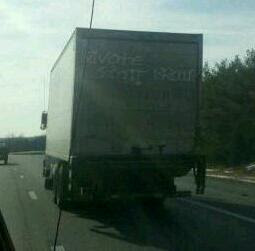 This is my fourth and final report of my observations at the Scott Brown campaign headquarters. Once again, I visited the Needham headquarters, the same place as for my first two reports.

Here’s the bottom line: The place is on political fire.

In my first visit on January 9, I noted that the headquarters was “bursting at the seams with energy and enthusiasm and support.” That remains the case with one big difference. Now the energy is much more organized and focused, as if the tidal wave of support had been harnessed.

Throughout my 2 hours at headquarters, there was a steady flow of people walking in to pick up lawn signs and bumper stickers. They went through hundreds in my short time there. As soon as they get these items in at any of their locations, they get handed out to visitors in short order. Many people also were dropping by to make follow up donations.

No one is complacent, at all. Everyone seemed to understand just how much work needed to be done over the weekend.

I did not make any calls myself, although my wife did. I can tell you that based on what she heard and I overheard, the response continues to be very positive. I don’t think Coakley’s hit pieces are working, and I think Brown has made a wise decision to stay mostly positive.

I”m not going to say anything else, except that people are mad as hell and they don’t want to take it anymore.

Below is a photo of a voter who came to pick up a lawn sign, and above right (sorry for the poor photo quality), a truck we spotted on the highway on our way home with the words “Vote Scott Brown” inscribed in the soot on the back.

This is a blue collar revolution. 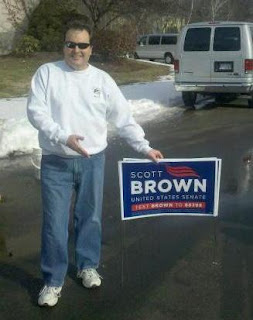 This isn't too surprising since the editor is a Republican, but it's good to have nevertheless. Fitchburg is one of the poorest cities in the state, with lots of vacant store fronts all along main street and high unemployment. The mayor has even turned off half the street lights at night because the city can't pay the electric bills anymore. It was an old manufacturing town along the Nashua River, overwhelmingly blue collar, and never recovered from the loss of the factory jobs back in the 1960s. If you're a real estate investor who still has money, there's certainly a lot of property available, and it's on the commuter rail line to Boston.

"We are endorsing Scott Brown for the U.S. Senate because we believe he is capable of bringing a common-sense approach to Washington, D.C., focused on serving the people of the state who are struggling to get by, rather than the special interests in the Democratic machine of which Coakley is such a big part of.

"Scott Brown understands at this crucial time in our history that big government is not the answer to what ails the American economy. He instead is committed to cutting taxes and spending, which will empower Americans to start new businesses and grow the economy."

Thank you for keeping us abreast of what's happening in Mass. Still sending prayers for Brown's success their way. 🙂

Thanks, Professor, for the smart, detailed blogging about the race. You've made a huge contribution to Brown's success. Among other things, you persuaded me to back him:

Here's my suggestion for how Brown can insure that he holds onto the support he has, maximizes his momentum in the final days, parries Coakley's attempt to drag him down with late negative ads, and neutralizes any help to Coakley from Obama's campaign visit Sunday:

Keep his current ads running through Saturday and then for whatever time he's bought Sunday and Monday, put up an ad that thanks everyone for their support and encouragement, points out how lucky everyone is to live in the US and Mass, given the horrendous state of affairs in Haiti, and urges everyone to do their civic duty by voting on Tuesday and their humanitarian duty by donating something to Haiti relief.

All the work you've done, Prof, is much appreciated.

Quoted from and Linked to at:
Stacy McCain In Bosstown IV

I don't know what is a bigger surprise, that Stacy McCain and I have managed to miss you over and over again or that I missed my own hometown paper's endorsement of Brown because of bopping around the state.