Last Saturday I was at the Needham campaign headquarters of Scott Brown, and I filed two reports of what I found. My two reports are here and here.

Today I spent an hour at the Wrentham (Brown’s hometown) local campaign “office” not far from the Patriots stadium. I use quotation marks around “office” because it really was just a satellite telephone location consisting of a large room with phones around the entire perimeter.

I arrived at about 3 p.m. and the 20-25 phones were filled with volunteers calling independent voters using a computerized system which could tell us the towns to which we were calling. We started in a heavily Democratic area, and then the system switched to a different town.

The response continues to be overwhelmingly positive from the phone calls. I was told the response rate, which they track, and I can tell you that based on what I heard, I have every reason to believe that Rasmussen and PPP have a good understanding of how independents are breaking. Of course, I don’t claim to have seen a representative statewide sample, but what I saw is consistent.

Anecdotally, there was a little more resistance in the heavily Democratic area, than I saw in the other town or on Saturday. But still, the overall numbers were very positive.

I made more calls this time than on Saturday. Other than one person who said “forget it buddy,” and a few who rushed me off the phone (I’ll take that as a “no”), by far the majority of people with whom I spoke not only expressed an intention to vote for Brown (and some already had by absentee ballot), but wanted to talk about it. Based upon what I could hear in the room, it appeared that many of the callers were getting an earful of support from people who wanted to talk.

One elderly woman told me that her entire family always had voted Democratic, but not this time. She said they were sick of politics in Massachusetts, and very scared about Medicare cuts. A few other people expressed similar sentiments.

I sat next to a union worker who was making calls for Brown. He told me that most of the unions (with the exception of SEIU and a couple others) have been strangely silent. Usually the union leaders will push a particular candidate, but he said it was strange that nothing had been passed out about this election. He also said that union members are really upset with the tax on health care benefits, and he would not be surprised to see many individual union members vote for Brown.

The photo at the bottom of the post was sent to me by this union worker from his cell phone. It is a Brown for Senate poster surrounded by a metal structure and lights. It was built by a member of the steelworkers’ union, he told me.

As before, I only saw a small snapshot of the campaign. But everything I heard and saw tells me there still is a lot of enthusiasm in the Brown campaign, and that the public is in an ornery, almost spitting-mad, mood towards the current political establishment. 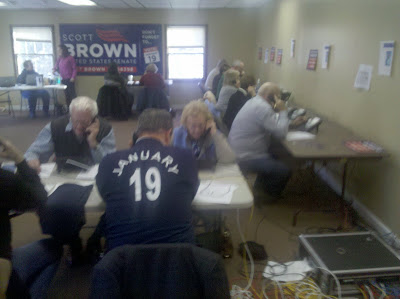 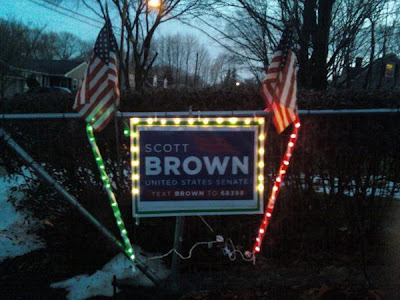 Will Union Members Walk The Plank For Coakley?
Coakley Glances at Her Watch – For Six Days
Is SEIU Behind Anti-Brown Push Polling?

Awesome. Thanks to you and the others for volunterring your time.

The money bomb is at $758K. He might raise a million bucks today.

Unemployed for the nonce, but contributed any way.

thanks for the update. I am really hoping that Brown will pull off the upset.

Professor, I can report that my experience working at the Hyannis office on Cape Cod is completely consistent with all of your reports over this past weekend.

My 15 year old daughter has caught the political bug because of the tremendous upheaval over the last couple of years. She accompanied me to Brown's office last night and had a great time. She is bugging me to go to Boston next Tuesday for the (hopefully) victory rally.

I also made calls yesterday (from Holyoke) and found that callers who would answer favored Brown by about 4 to 1. I can't say how that extrapolates to the voting public, but it didn't seem like a tight race from what I was hearing – it seemed like Brown's race by a large margin.

BTW, thanks for your excellent coverage here at Legal Insurrection.

don't have much money and high bills, but i contributed today and i would like to see the man win and put a stop to this madness!

Thank you so much for keeping us out here in the other states abreast of the enthusiasm. I see he is at 930K an well on his way to a million at 9:53Pm EST. I am praying for a win to STOP this all out ASSAULT on our FREEDOMS. God Bless
America and God Bless the United States of America!

Way to go, dude! I sent some cash from out here in San Diego.

Hi Professor Jacobson,
We've been making calls from the Wrentham office for the last week, and the response has been very positive. I didn't make it today, but my husband was there and recognized your picture. He's not in the picture you took – he must have arrived just after you snapped it, as he was sitting at the long table along the wall.

Thanks so much for coming to MA to cover the race. You've helped tremendously with the "moneybomb." It just passed the the $million mark. Amazing.

Thank you so much, Professor Jacobson, for your hands-on efforts with the Brown campaign. $1,050,096 is mind boggling. Brown won the debate tonight, hands down. To they naysayers, I say, eat a big bowl of STFU. (Apologies).