Also see my update to this post, Brown HQ Report #2

Things are totally crazy here. The phones are ringing off the hooks. The phone bank (second photo below) is full. There were a lot more people calling than shown in the photo, other rows and other rooms. They kicked me off the phone because I was spending too much time on Twitter (!) and they had people lined up to call. They need people to call from home, the link is at the website. Some other offices had openings, but not many.

Scott dropped by to say hi to the volunteers (first photo below, with a hot volunteer). The parking lot was full on a Saturday (bottom photo).

I made calls and I overheard others on the phone. The response we have been getting from independents is overwhelmingly supportive. From the calls I made, people seemed genuinely angry with the current state of the economy and politics. The support was genuine, not just lip service to get me off the phone.

People are furious at the attempt to delay a certification if Brown wins. That point hits home with a lot of the people we have called.

While money is coming in, they need more to make it to the finish line in 10 days. Donate online if you can, since the phones are so busy here.

I’ll have more later. And will update on Twitter.

Update: PPP has Brown up by 1 point in poll just released (7 pm) 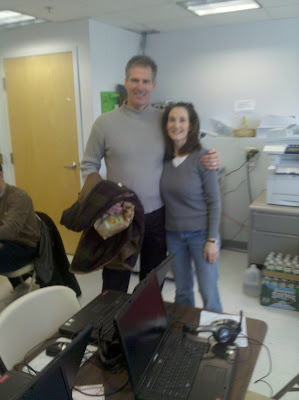 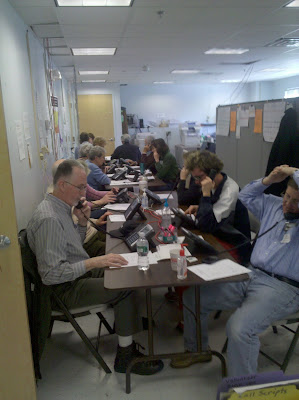 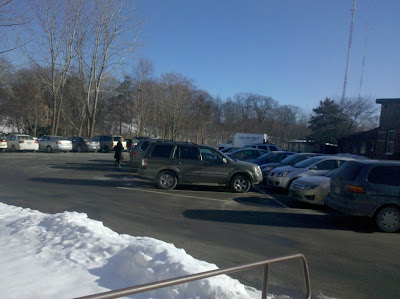 ——————————————–
Related Posts:
Is SEIU Behind Anti-Brown Push Polling?
Call Dems Bluff On Refusing To Seat Scott Brown
The Death of Feminism: “Save Us Martha!”
Follow me on Twitter and Facebook

Was it Al Franken who was seated in the Senate before he was certified by his state? I forget.

Thanks for great coverage.

You are the Ernie Pyle of Tea Party II!

Excellent work. It's good to know that even in liberal Mass., people are fed up with the corruption and arrogance in D.C.

I have a huge crush on every single one of you who're giving your time to this. Seriously. You are patriots and this is a most worthy battle!

Scott Brown HQ: They kicked me off the phone because I was spending too much time on Twitter!

The boys at Hillbuzz call Scott Hottie McAwesome – and they are Democrats.

Maggie. I think it's the GIRLS at HillBuzz. They started out, after all, as Hillary Clinton fans. Fascinating stuff!

Beware PPP. They have been horribly wrong in the past. (NY-23)

If Rasmussen were to have Brown ahead, I'd be happier.

This is getting interesting.

The country is starting to tune in.

We have a blog post supporting Scott Brown – including 3 campaign video posted on Common Cents…
http://www.commoncts.blogspot.com