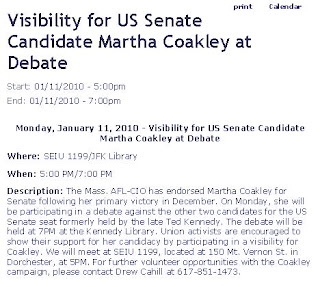 Tonight at 7 p.m. is a televised debate in the Massachusetts Senate special election.

All three candidates will be participating, since Martha Coakley refuses to debate Scott Brown one-on-one, despite calls from the Boston Globe and others.

SEIU and other unions are organizing “visibility” for Coakley supporters at the debate, to create the appearance of grassroots support.

I wonder if the union leaders have explained to their membership how Coakley’s support of excise taxes on “cadillac” health care plans will devastate union members.

Maybe that’s why the show of support needs to be organized.