UN Climate Chief to US: “Show Me The Money”

UN Climate Chief to US: “Show Me The Money” 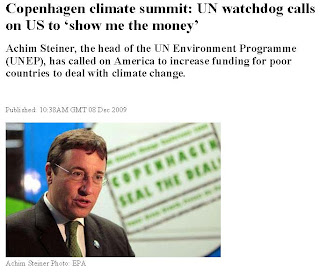 Why am I not surprised. The head of the UN’s climate organization has demanded that American taxpayers “show me the money” by funding billions of dollars of climate change programs in poorer countries:

At the Copenhagen climate summit, the world’s top environment watchdog welcomed the fact President Obama will now be attending the talks but said the US target of cutting carbon emissions by 17 per cent by 2020 on 2005 levels was not high enough.

“To make up for this, he said the Americans must invest in a global fund to help developing countries cut their emissions.

“The litmus test is show me the money,” he said. “If you are going to come to Copenhagen and you are not able to deliver emissions targets at the moment along the lines the other industrialised countries have done then possibly one way you could convince the rest of the world you are serious about engaging is to finance – with a significant and credible contribution – the start up of the quick-start funding and become part of a an international financial ambition that will convince developing countries that they actually have an interest in signing a deal, rather than being taken to the cleaners as many of them have decided.”

None of this is surprising. The global climate change industry is all about shaking the dollars and cents out of our pockets. From Al Gore’s profiteering off of the hysteria he has created, to the large corporate interests involved in selling “green” as a marketing tool, to researchers willing to stifle debate and tamper with data so as to justify funding, to an internationalist movement interested in transfer of wealth as a social policy, the global climate change debate is all about showing the money.

The “show me the money” line is from the movie Jerry Maguire, about a desperate sports agent willing to do anything. So fitting that the UN climate change guru now uses such a crass phrase:

Hey! Tell this guy for me, I have something to show him. It's my middle finger with a big shout out to verbalize the expression.

And while he's at it, he can kiss my ass too.

We'll show them the money…right after Achim Steiner pays us back for what we spent liberating his Continent from the Nazis.

This statement may be bigger than it sounds. We'll know for sure in a few weeks. In other words, if this guy wants us to ante up, that means Obama has to either put money in or not put money in. If he does show them the money, the electorate back home are going to go crazy demanding to know why we're pumping money into European World Ideas instead of bailing ourselves out. If he doesn't, he looks like he was never serious. The way this could blow over is if this statement goes seriously underreported. But ultimately I think everyone knows why Obama is there: To show them the money.
Thoughts? Comments?

And the saga continues, for all intent and purpose Obama and his agenda appear to answer to no one!!

"Show me the money," say those who are brandishing the hammer and sickle. Obama will show them the money.

Read "The Obama Timeline," and nothing will surprise you…

Well, I don't want to show them any money. What's more, the US debt situation is so severe, we actually have no money to show. What we have is a promise on the earnings of our five year olds. We may have assets, we may have productivity, but we don't actually own anything. We're renters here.

Maybe we could qualify as a beneficiary?

I'm not positive the objective is to redistribute the money to anyone in particular. I think the agenda may be to strip U.S. equity, period. As long as Americans are in debt to the point of irrelevancy, we're not a threat.

I have just finished reading China Daily for their perceptions as they head to Copenhagen; I have read the Guardian about the revelation or rather the leak of the draft agreement among the wealthy nations that has thrown the Conference into turmoil – visit me at http://samandimp.wordpress.com. I'll be following China. They go as an undeveloped country – believe it! My question: "Will they Champion the Underdeveloped countries? It fits with their relationships in terms of business and in the purchase of raw materials.

The laugh line was the statement that the Euros have "delivered" the emissions targets higher than the US. In fact the US is the only country that has reduced its emissions approximately 2.2 percent. The other industrialized countries have all missed their Kyoto targets, but since these countries have no similar court enforceable targets (that is only in the US can the courts overreach and compel the other two branches to destroy the US economy in the name of climate hoax) they can just give out press releases without any possibility of being held to those fantasy numbers. Unfortunately we have a buffoon in the Oval Office who actually would destroy our country in order to save it.