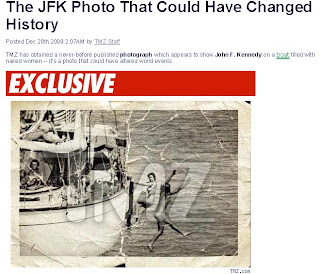 TMZ has a flock-full of egg on its face today, as its monster break-through of the year — the infamous JFK Photo that could have changed the world — turned out to be a hoax.

The photo (right), purportedly from the 1950s showing JFK on a boat full of neked wimin, actually was a Playboy photo-shoot from the 1960s.

Exactly how the photo, if real, would have changed the world is unclear. There was no TMZ or internet or independent media in the late ’50s and early ’60s. The mainstream media covered up all JFK’s affairs anyway, so it probably would have buried this photo, just like the mainstream media in 2008 … let’s not go there, this isn’t about him.

What is really intriguing, however, is that TMZ had numerous experts examine the photo to verify its authenticity:

TMZ had multiple experts examine the photo — all say there is no evidence the picture was Photoshopped. The original print — which is creased — was scanned and examined for evidence of inconsistent lighting, photo composition and other forms of manipulation. The experts all concluded the photo appears authentic.

Professor Jeff Sedlik, a forensic photo expert, says the print appears to be authentic. Sedlik says the photo is printed on paper consistent with what was used in the 1950s. The emulsion on the surface of the print has numerous cracks — the result of aging and handling….

Forensic analyst Sedlik superimposed an image of Kennedy taken at the Democratic National Convention in August 1956, just days before Kennedy went on the Mediterranean cruise. Sedlik says the features from the two pics almost precisely sync up. TMZ has also had two Kennedy biographers examine the photo — they also believe JFK is in the picture.

These TMZ experts, it is reported by my exclusive sources, also have verified that Obamacare will lower the deficit, expand coverage, allow people to keep their current insurance, and not increase taxes on anyone making under $250,000 per year.

This is devastating for the future of journalism.

Without the shining beacon of TMZ, will high-school quality operations such as CNN, MSNBC, NY Times, etc. ever be able to gain even a slight measure of journalistic competence, ethics, and integrity?

Brilliantly put William, I linked you on this….