Not content to call upon the Susan G. Komen Foundation to fire Hadassah Lieberman, Jane Hamsher now is trying to organize secondary pressure on the Komen Foundation through various celebrities who are involved with the organization. The online Petition states: 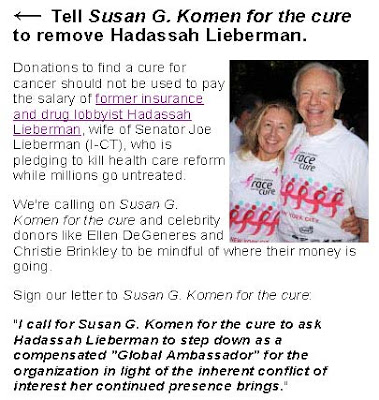 As I said before, it’s a shame that the “public option” advocates are willing to politicize breast cancer reasearch, while at the same time putting another nail in the feminist coffin by singling out a woman for professional retribution primarily because of her husband.

But at this point, almost nothing surprises me.

Update: Now DailyKos is getting involved, so you know it’s going to get really ugly, ALL HANDS: Remove Hadassah Lieberman as paid shill for the Susan G. Komen Foundation:

It’s grotesque, unseemly and sadly “uniquely American”, that the wife of the man who is working overtime to kill healthcare, is an “ambassador” for the Komen Foundation.

Added: At least not everyone at DailyKos is on board the anti-Hadassah movement, as this Diarist understands (emphasis in original):

FDL is out in force pushing their latest project: To get Hadassah Leiberman fired.

Do you really think going after Leiberman’s spouse will win us any brownie points with the public?

I can see it would start a huge flap, with the attendant publicity, but the blowback could be murderous for us.

So what are you trying to achieve? Payback? Or are you actually thinking this would help our case in the Senate?

I truly feel for Mrs. Hadassah Lieberman and her husband…When Daily Kos gets involved, all sorts of nasty, vile, and uncalled-for things get said (and mostly untrue things). It's just another example of how if you don't toe the line for the liberal agenda, you will be crucified.

Viewing this controversy and the very outspoken opinions of the members of the Komen foundation, I would be very reluctant to donate money to them. After all, you would have to worry if it was going to research or to a PAC.

I have commented before on this and to summate my feels, I think that there are problems with regulation of insurance companies. So regulate them, why change the entire US?

The biggest donors to Lieberman's campaign is the insurance idustry. It also does not hurt that a lot of the insurance industries have their main offices in Conn. Dont forget Lieberman was against Healthcare reform During President clintons attempt to reform health care. I wrote about something similar on my blog check it out leave a comment. http://alternateviewsnews.blogspot.com/