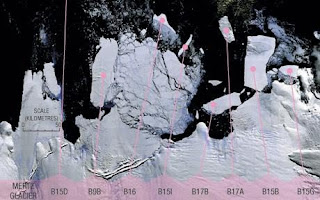 The Telegraph in Britain has a story about a massive iceberg which broke off from the Antarctic ice cap and is heading for Australia. The iceberg is so large that if it hits the mainland it would cause a 3.0-4.0 tremor on the Richter scale. That’s a really large chunk of ice.

The mammoth chunk of ice, which measures 12 miles long and five miles wide, was spotted floating close to the mainland by scientists at the Australian Antarctic Division (ADD).

Known as B17B, it is currently drifting 1,000 miles from Australia’s west coast and is moving gradually north with the ocean current and prevailing wind.

Dr Neal Young, a glaciologist working for the ADD, said that if the iceberg eventually reached Australia waters, it would crash into the continental shelf causing a magnitude three to four tremor.

This is the sort of story which is used by global warming activists to predict the end of the world. But there were a couple of interesting points in the story.

First, how the iceberg was spotted:

Dr Young said an iceberg the size of B17B had not been seen so far north since the days when 19th century clipper ships plied the trade route between Britain and Australia.

Hopefully you have picked up on what I picked up on. There have been icebergs this size since at least as far back as the 1800s, but we did not have satellites to spot them with any consistency, and therefore have scant historical records to which we can compare current events.

This highlights something profoundly troubling about the politicization of global warming science.

Those who stand to profit politically and economically refuse to acknowledge that we are limited in our historical knowledge of measurements which depend on technology that did not exist less than a century ago. We also have limited knowledge of historical events which, when they happen today, are said to reflect manmade global warming.

This is just an iceberg story. Nothing to see here, move along.

——————————————–
Related Posts:
UN Climate Chief to US: “Show Me The Money”Thanks, Global Warming
Bush Hid Ice Images From People Who Can’t Use Google

In a related piece of news, Al Gore's tears for the Mt. Kilimanjaro ice cap were found to be all wet, as discussed here.

I do not understand how people can take any scientific advice from Al Gore. He left Divinity School one step ahead of being thrown out, he flunked out of Law School. Rumor has it that he really majored in dangerous drugs during that time, be that true or not, what qualifications does he have?

The man is simply not the brightest bulb on the Christmas tree.

People will realize that global warming is true when there are Eskimos making igloos on the white house lawn. Seriously even if you have a half brain at this point you have to realize what is going on around us right now in regards to global warming. People who deny it are simply banking on being dead by the time the sh*t hits the fan its that simple. What other logically explanation could they have? Please check out my blog I have some great comments on Sarah Palin and Glen Beck. Must Reads
http://www.alternateviewsnews.blogspot.com

The Iceberg story is just more Junk Science from the Far Left. They are so desperate for a 'crisis' now that they're makin' them up as the go. Really, it's kinda funny. Thanks for sharing this. 🙂

but but I don't understand! How could there be such a big iceberg moving north? Shouldn't global warming be melting it?

Jhess, the Hadley CRU story broke awhile back, and it showed (among other things) that the notion that the 'science is settled' is absolute bunk. If you really want to look around, check out Drudge's page. The midwest is getting slammed by a huge snow storm, Houston (down Texas way) is suffering from cold and snow as well. Our experience of the world does not match the computer model predictions. And haven't…for ten years now! CO2 keeps going up, but we are freezing over here. If you like, check out these nano tech egg heads (they're a fun bunch).

But enough with the mantra. I'm sick of that AL Gore tantrism.

So, with the trade industry over at Copenhagen giving away their services for free, do you think the elites will have it together enough to leave a big tip, or will they be resigned to getting what they paid for?

I'm certain the Aussies have much larger issues to deal with. Read this and weep. The science of lies extends directly to the data itself. Climate scientists need to drop the moniker "scientist" in exchange for zealot with a degree.

Please do yourself a favor and read this. Better informed is better armed.