If Sarah Palin Had Done This

If Sarah Palin Had Done This

TMZ fell for a hoax regarding a supposed photo of JFK on a boat with lots of naked women.

Before the hoax was revealed, Andrew Sullivan authored a post on the subject, which has been pulled completely. Here is what remains on Sullivan’s blog:

The link to the original post by Sullivan, titled “Sy Hersh was right,” has gone dead. But the dead live on in Google cache, and it is obvious why Sullivan pulled the post.
From the supposed TMZ “proof” Sullivan drew all sorts of wacky sociological conclusions about a bygone era when “feminism was still at bay and powerful rich men could fill their yachts with a variety of sexual objects.”

His book, “The Dark Side Of Camelot”, was one of his best: scenes of simply staggering sexual shenanigans, rampant abuse of power, close connections with the mafia, nepotism up the whazoo. And now we have some photographic evidence – courtesy of TMZ.com – of the Kennedy lifestyle, when feminism was still at bay and powerful rich men could fill their yachts with a variety of sexual objects. Take a look at this scene from the mid-1950s. And Tiger: you were born too late.

Now if Sarah Palin had done something like this, can you imagine Sullivan’s howls of cover-up? This would be number whatever on the list of Palin’s odd lies. This cover-up would be used to claim that Trig was fair game again, because only someone hiding something would hide something.

What is that saying about glass houses? 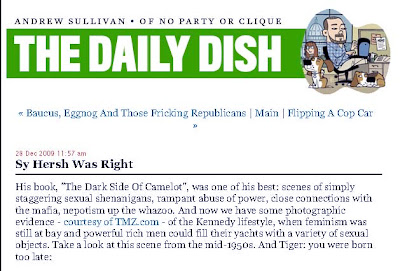 Update: You can stop Obamacare – GOP Abandons Scott Brown, But We’re Not

Aaah, but can you be sure it was really wacky Andy that posted the original or one of his zombies marinated in Sully's brain juices?

Andrew will probably end up blaming this on one of his many ghost bloggers.

Does the fake photo qualify for 'Fake But Accurate' status?

"Andrew will probably end up blaming this on one of his many ghost bloggers."

Not a chance. He'll blame the "neo-cons".

Eh, so he was had. Happens to everyone who relays scoops for a living.

I thought we deported him….

So this is what we'd be getting up to in Ireland if it ever stopped raining.

Andrew is a woman hater in the worst order. Of course he fantasizes about the days when powerful men could have women in any way they wished to.

And he dreads the day when Hillary Clinton (who still gives him "cootie vibes") or Sarah Palin (whose uterus he is obsessed with) will be in the White House with his fake media balls in their proverbial hands.

I look forward to that day with great anticipation, in fact. The day that Sully and his ilk will be forced to grovel for a "scoop" from a Palin administration.

AS will probably blame Bush …

and I agree with Jan. Reading AS is … so 2000ish. Let him rest in peace. Let's discuss important pundits.