Posted by William A. Jacobson Wednesday, December 16, 2009 at 11:40am 1 Comment
More Sharing Options

The headline in USA Today/Gallup’s latest health care poll is that the public, by a 48-46% margin, is against or leaning against the current health care proposal:

Forty-six percent of Americans say they would advise their member of Congress to vote for healthcare legislation (or lean toward doing so), while 48% would advise a no vote (or lean in that direction).

This is misleading, and overstates support for the bill. The reason it is misleading is that it includes people who originally responded that they had “no opinion,” but then were asked how they “leaned.”

Gallup leaves for the end of the press release, under the sub-heading of “survey methods,” the numbers reflecting people who did have an opinion: 36% for, 43% against.

So for people who care enough to have an opinion, there is an 7 point margin against Obamacare.

The 43% opposition number among people who have an opinion is the highest it has been this year. Now that should have been the headline. Is this another case of “hiding the decline”? 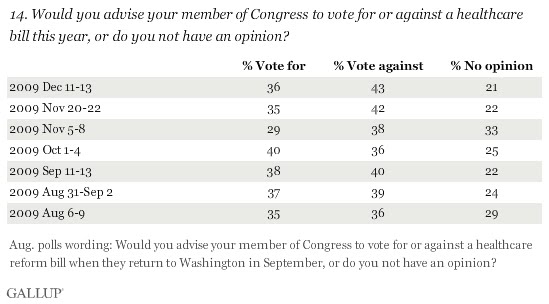 I can't find the mention of number of republicans and or democrats polled. (I imagine it is significantly more of the latter)