Posted by William A. Jacobson Thursday, December 3, 2009 at 07:45am 3 Comments
More Sharing Options 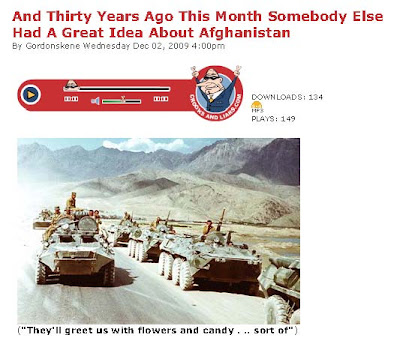 Not by me. A comparison between Barack Obama and former Soviet leader Leonid Brezhnev is suggested by a blogger at Crooks and Liars, using this graphic to attack Obama’s decision to increase U.S. troop levels in Afghanistan.

The Soviets invaded Afghanistan to help prop up a Communist military regime as part of the Soviet’s longstanding goal of dominating Afghanistan as a gateway to the Middle East.

There is no legitimate comparison between the Soviet attempt to prop up the Communist military government it had installed in Afghanistan, and the U.S. response to the 9/11 attacks. By removing the repressive Taliban regime and its al-Qaeda elements, the U.S. responded to a direct attack and the likelihood of future attacks. A restoration of Taliban rule would be a direct threat to the U.S., not to mention a blow to the Afghan people.

There are legitimate criticisms of Obama’s strategy and speech to be made. But snide comparisons of Obama’s decision on troop levels to Brezhnev’s decision to invade also are not legitimate.

But then again, perhaps that blogger would prefer an Afghanistan which served again as a base for worldwide terrorism and attacks on the U.S. at home and abroad. Although it would be harder to write snark about that.

I disagree, there's a plenty of ground for comparison. In both cases, external military force provided (or attempted so) for security and basic governance. In both cases said military power props up a regime in Kabul, survival of which on its own is in question. When Soviets were removed, the country plunged into chaos and was overtaken by Taliban — isn't it exactly the scenario being envisioned in case of cut-and-run?

There's also a lot of differences, in particular the end goals of the two nation-building efforts are different. But to reject the directly applicable lessons from the past is rather short-sighted, I would think. Something has to be done to break the model of Kabul vs. the rest. When Americans set up the shop in Kandaghar, I was hopeful. But now we seem to have fallen into the old pattern, thanks to our NATO friends taking over and inviting the raffle of NGO parasites that channel the money to the corrupt elites in Kabul, no different from Soviet times.

Russia lost over 60,000 troops, how many have we lost? Shows how inept they really are.