Posted by William A. Jacobson Thursday, November 5, 2009 at 11:13am 1 Comment
More Sharing Options

No, not really. But neither did the Democrats on Tuesday, notwithstanding Nancy Pelosi’s proclamation on Wednesday that “We won”:

“From my perspective, we won last night. We had one race that we were engaged in — it was in northern New York. It was a race where a Republican has held a seat since the Civil War, and we won that seat. So from our standpoint, no. We had a candidate that was victorious who supports the health-care reform… So from our standpoint, we picked up votes last night, one in California [CA-10] and one in New York.”

Fine, you can have NY-23, we’ll take Virginia and New Jersey and tons of local elections in which Republicans replaced Democrats in a surge of anger at your out-of-control spending and national fiscal suicide. And we’ll even concede to you your new math, where you count a Democrat replacing a Democrat in CA-10 as a “pick-up.”

And you can march your party off an electoral cliff by passing the monstrous health care and cap-and-trade bills, comfortable in the knowledge that after last Tuesday all is well, and there is nothing to be worried about, and the moon is made of cream cheese, and there is a tooth fairy, and Gail Collins agrees with you. 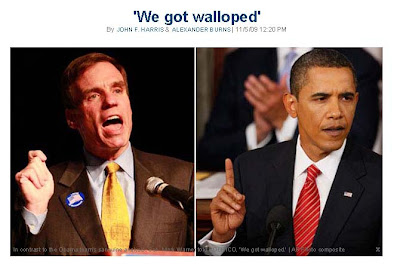 The last numbers I saw for NY 23 were D 49% C 45% and R 6%. Given the clusterf&%$ surrounding this election, I don't take that as an endorsement of the D, who would have lost if he had faced a single opponent with a unified party behind him.