Posted by William A. Jacobson Thursday, November 26, 2009 at 09:15am 9 Comments
More Sharing Options 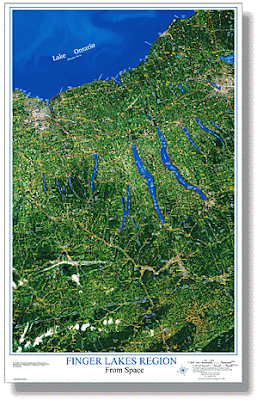 Ithaca, NY, where I work, is in the Finger Lakes region of upstate New York. Ithacans hate global warming because it is so corporate and capitalist.

So at what point in time should global warming have stopped?

“The ‘Ice age’ was really a series of many advances and retreats of glaciers. The Finger Lakes were probably carved by several of these episodes. Ice sheets more than two miles thick flowed southward, parallel but opposite to the flow of the rivers, gouging deep trenches into these river valleys. Traces of most of the earlier glacial events have vanished, but much evidence remains of the last one or two glaciers that covered New York.

The latest glacial episode was most extensive around 21,000 years ago, when glaciers covered almost the entire state. Around 19,000 years ago, the climate warmed, and the glacier began to retreat, disappearing entirely from New York for the last time around 11,000 years ago.” (Image source here)

For me, I’ll just say “thanks global warming,” we couldn’t have done it without you.

Update, from the Hmmm Dept: Pretending the climate email leak isn’t a crisis won’t make it go away and NZ’s NIWA accused of CRU-style temperature faking.

I have always believed that temperature variations based on polar ice have ALWAYS existed. Most other patterns we note in nature are cyclical.

As a fellow Western New Yorker who has studied our geology here – much of it is unique. Glacial action has caused the birth of many lakes here. I am grateful for the beauty of this area – for the lay of the land here.

Bring on the global warming. Wait a few thousand years and it will change perhaps sooner with Al Gore out there pushing the finish line. Who ever thought that Science could be tweaked for political and monetary gain? We should have noted the familiar tenor and tone eearlier.

You thank global warming – but I can only thank Al Gore, for without him the climate, the internet, and Christmas would not exist.

I noticed Monbiot has now coined a new term (or at least new to me): Climate rationalists. I guess that means the climate skeptics are now "irrational climate skeptics". Nice.

I can see Lake Skaneateles from the back deck or out the living and dinning room bay windows.Better in the winter time as all the leaves are off the trees that have grown larger over the last 10-15 years.

I saw some of that region during my visit to USA, but you do not get to see much from a train 🙁

My real experience of what glaciers are like came when I was in the Rocky Mountains in Canada. It was there that we actually visited and stepped onto a glacier in the Columbian Ice Fields. The day we were there the temperature was above 90F. We were told that the glacier moves slightly every year or so. They were willing to blame "Global Warming".

We also learned a bit about the devastation caused by the pine beetle and that it can only be eradicated by two events, (1)fire and (2) a very low temperature. It did not reach that temperature last year and so the beetle was not eradicated. However, what is more important is that in order to have regrowth in the pine forests there must be fire. The pine cones will not open unless there is fire……

Another observation during my time in the USA was that the East Coast was not all that hot during the summer. It was even colder than when we lived in Ohio in 1984-85. Yet in that mid-west and west coast regions the temperatures were indeed a lot higher, and Seattle had a record temperature for July. However a few days of high temperatures is still not a sign of global warming that is "accelerating".

The region of the Canadian Rocky Mountains where we spent most of our time had lots of lakes that were formed because of these same glaciers – Lake Louise, Jasper and Banff being the noted examples. The water was clear and blue, and it was something that I had not witnessed in my entire life. Beautiful.

@Rick and yet it is Monbiot who is acting in an irrational manner since he is unwilling to accept the truth about the impact of the deception of Jones, Mann and co.

Does the dubious data supporting Global Warming negate Environmental Stewardship? If Industrial Pollution does not lead to Global Warming, does it mean we could keep dumping toxic chemicals into the Hudson, perpetuate smog-layered cities ala L.A., keep burning rainforest, allow the extinction of species?

A PR problem with Conservatives is that we have allowed the Left to conflate the issue of Global of Warming with Environmental Stewardship. The general public doesn't know the difference. If we mean to rebrand ourselves for 2010 and 2012 to younger voters, we must help the public make that distinction.

Ask any East/West coastal voters what they think the Republican's environmental stance is and the answer is always limited to Oil Rigs and Oil Spills. We need to change the misperception that we are incapable of environmental protection or too backward to expand consumer choice by including alternate energy.

If we dismiss Global Warming's faulty data, it's in the Republican's party interest to do it as Teddy Roosevelt.

Just ask the nuts, "Do you want to eat more meat or more veggies?" Veggies like warm weather to grow…