Latest tracking poll from Rasmussen shows Obama at -14% on the strongly approve/strongly disapprove index. Look at the chart, and it shows a steady rise in negatives and steady fall in positives, for month after month since the Democrats rolled out their health care plans. And the pace has picked up since the Pelosi-Obama plan passed in the House. 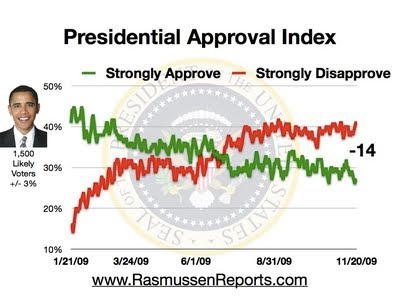 The Senators voting this Saturday night on whether to formally open debate (and then rush home for the holiday) on Harry Reid’s 2,074 page plan to restructure the health care system should keep this number in mind before they fall on a sword in support of this President and the Majority Leader.

——————————————–
Related Posts:
Reid: Hurry to Open Debate Then Let’s Leave for the Holiday
What About The 255 Million?
Deception and Tyranny Key To Health Care Reform

Does anybody know if my understanding of the process is about right?

Here's how I understand it:

So, it is the 60 votes to open debate on Saturday that is the criticial vote, since the amendment process is where the "horse trading" (i.e. bribes) occurs to ensure they can close the debate and pass the bill in the Senate.

But King Harry may decide to disregard some of the amendments when he merges the Senate bill with the House bill, knowing he only needs 51 votes for final passage of the bill into law.

It looks like it's over. Reid bought Landrieu. He claims he knows how Lincoln will vote, so I assume that means she'll vote to bring it to debate. Ben Nelson just said he'll vote to start the debate.

That really just leaves Bayh and Lieberman. Bayh doesn't seem enthused by the bill, but I also don't think he has the backbone to be the only Democrat to oppose cloture.

Lieberman is probably our only hope, assuming all Republicans vote against it.