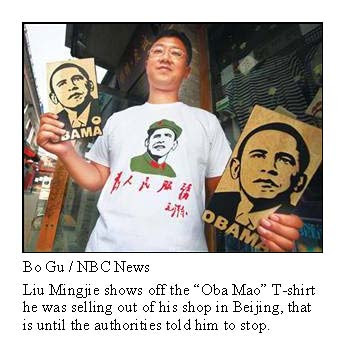 In further honor of the capitalist entrepreneurship of the Chinese people who have honored the occasion with the “Obama Mao” T-shirt; and

The Communist government of China having banned the “Obama Mao” T-Shirt as a sign of respect for the Yuan; and

It being resolved that the preservation of this artifact of kitsch is in the interest of mankind;

Now, therefore, by the powers vested in me,

It is hereby resolved that the Obama-Mao T-Shirt be and hereby is inducted into The Official Guide to Obama Kitsch.

So it is written, so it is done.

Update: No, Japanese “Obama Toilet Paper” will not be inducted into the Official Guide, which is a classy publication. (h/t HotAir)

And the Chinese mean business, CNN reporter detained in Shanghai over Obama-Mao T-shirt

Hilarious… I needed to laugh this morning. And thank you for the "Blog of the Day" nod for Frugal Café Blog Zone. I've been a faithful reader of yours for the past year, William, and have even showcased your notorious DijonGate piece (which still cracks me up) on my blog. From August 7, 2009: Why I Love Le·gal In·sur·rec·tion: Obama's "Loss of Hope" Economy & Remembering DijonGate

You combine humor with top-notch reporting/analysis skills, rare in the blogosphere. Keep fighting the good fight, and thanks again for the laughs.