Posted by William A. Jacobson Wednesday, November 18, 2009 at 10:41am 5 Comments
More Sharing Options

Whey do I have the feeling that this is Obama’s “Mission Accomplished” moment? 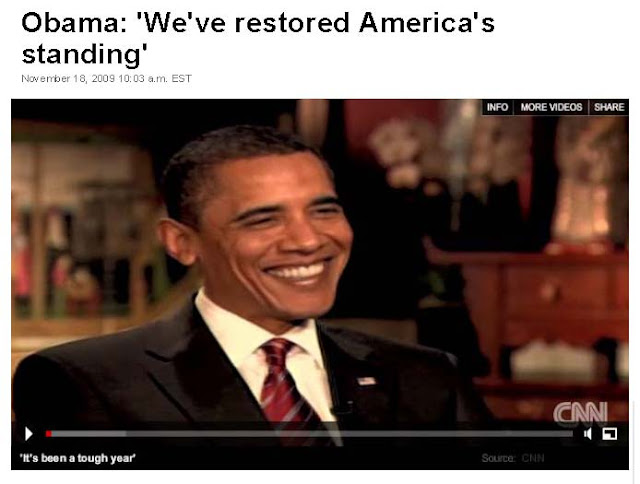 Obama is saying our standing is restored on the same day that it is revealed (by Jane Fonda no less) that one of his code pink fundraisers was meeting with the Taliban.

It is just too weird to contemplate

Hurray! Maybe next year Obama can win the Nobel Prize for Delusions of Grandeur

Before even watching the video, I had to double take on whether that was CNN or the Onion.

I cannot bear to watch that man….

So much for restoring America's position in the world. It seems there is truth, and then there is Obama's truth, then there is Truth (God's Truth).

Seriously, the Chinese even went as far as muting his speeches so that the people would not hear him. How is that restoring relations?

Then there is the historical perspective. Who was it that restored the West's relationship with China? President Richard Millhouse Nixon, who was greeted by Mao Tse Tung.

Ok so I perused the interview…. cough… choke… he is delusional….

If he thinks that the nations thrown under the bus, such as Poland, Czech Republic, Great Britain, France, Germany and so on are going to trust the USA with this man in charge… then he is totally delusional. As for the popularity poll, where is the proof that this is true?

My own feeling is that with this man in charge the world is not safe. Look at what has happened in North Korea, and then look how he turned his back on the Iranians in favour of a fraudulent result (actually if what I heard from Hillbuzz about the Iowa caucus re fraud, happened elsewhere then yeah this man is as much a fraud as Ahmanutjob). Then there is the meddling in the Honduras and the AP are continuing the lie that there was a coup in Honduras…. that bow to the Japanese emperor Akihito was so embarrassing to the Japanese that they would be thinking twice about trusting this man with anything. The Chinese try to lecture him about Capitalism…. and he thinks that he has restored America in the eyes of foreigners? Oh please…..

On the other hand, he has restored President Nixon in my eyes.