I’ll Have Some Palin Derangement Syndrome with my Turkey, Please

I’ll Have Some Palin Derangement Syndrome with my Turkey, Please

Posted by William A. Jacobson Thursday, November 26, 2009 at 08:10am 3 Comments
More Sharing Options 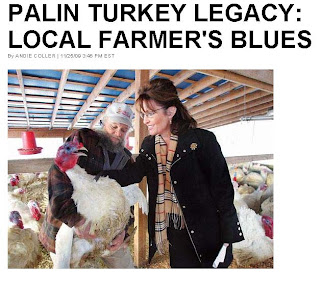 Sarah Palin’s visit to a turkey farm last year made news when the camera caught a shot of the owner slaughtering a turkey. The NY Times Editorial Board was all over the controversy.

Turns out the farmer in question has had a tough year, for a number of reasons, mostly related to the economy.

But when Andie Coller at Politico covered the farmer’s fate, the focus naturally was on Palin (image right).

Because no Thanksgiving would be complete without a headline and photo suggesting that Palin had caused this poor farmer’s problems, even if the article itself pointed out that the economy — not Palin’s visit — was the cause.

So on this Thanksgiving, Politico readers will get a small side order of Palin Derangement Syndrome with their turkey, no extra charge.

Well said. I did a post in which there was an overly large picture of a turkey with the caption:

The President will pardon this turkey but will not pardon Sarah Palin.

The Sarah Palin I saw at a book signing in Henrietta, NY. was gracious and could think on her feet.

For a few days (I stopped because I simply couldn't take the fury and nonstop Palin hatred over there) I was posting on HuffPo. It was fun to post stuff like "Palin's book sold 300,000 copies in ONE day!"
or "Fox News is fair and balanced!"
They would go absolutely insane. Like throwing holy water on the possessed.