Hacked E-mails or Else!

Hacked E-mails or Else!

The other day, when the news of “hacked” e-mails from a British climate institute hit the internet, I wrote Why The “Hacked E-Mails” Don’t Interest Me, Yet.

In the post, I noted that I did not have the time to devote to the hacked e-mails because I was too busy monitoring Andrew Sullivan’s attempt to uncover what was in Sarah Palin’s uterus in early 2008. Apparently another failed attempt at humor, because some of my readers took the post as an indication I didn’t think the hacked e-mail issue was important.

So here’s my take as of this moment in time:

The “hacked” e-mails are significant, but it is too early to fully appreciate the full impact of the revelations. I hope bloggers keep digging and analyzing and disclosing.

Of course, the left will try to silence debate. That’s what they do. My hope is that after a full analysis of the e-mails, and perhaps if some other brave souls leak information about politicized science, we can avoid disastrous economic policies like cap-and-trade resulting from global warming hysteria and political correctness. 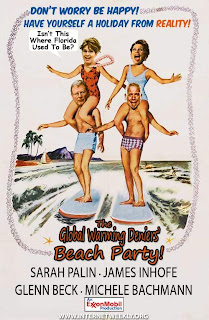 If that is the case, here some other headlines which may go down in infamy, along with Dewey Defeats Truman, as having really bad timing, having been released on the eve of the e-mail disclosures:

The argument goes something like this: “Remember, the planet is depending on us. The Earth needs us. We only have four months to act, or it will be too late. Pass the stimulus health care cap-and-trade bill immediately or there will be catastrophe.” The hacked e-mails burst this hysterical bubble, at a minimum.

Let’s get it right, or our children will be swimming — not in water — but in economic ruin resulting from failed policies based on politicized science propagated by people with hidden agendas who stand to make fortunes off of our misery.

I admit I was hammering you a bit to write on the hacked emails – because IMHO it's one of the biggest scandals ever to hit when you consider all the money that flows based on the information these lying global warming types provide.
But I did like the humor on the fascination with Palin's uterus.
Keep up the great work!

Apparently another failed attempt at humor, because some of my readers took the post as an indication I didn't think the hacked e-mail issue was important.

I thought it was pretty clear. I hope you'll ignore the folks who don't get it instead of dumbing down. This is one of very favorite blogs.

I got the joke and thought it was finny. Funny enough that I linked to it.

Anyway, the emails show that there is not as much consensus as we had been led to believe. It will be interesting if it turns out that the files had been leaked by an insider.

— I'm going outside and burn my leaves.

— Then, I'm going shopping for a giant SUV.

But this is the NON-Scandal of the decade.

Just because these scientists write and act like jerks in private conversations is not indicative of the quality of said science.

Either they are right–or wrong. Either they tweaked the numbers…or …did NOT.

They are good at what they do.

It was said Newton was an ass, yes, but likewise he was right about most everything. I've read the NYT story on this and seen the quotes. Seems the issue "trick" in the numbers is no expose of great importance, as this was just a simple colloquialism one of the commenters made.