Posted by William A. Jacobson Saturday, November 14, 2009 at 11:09am 8 Comments
More Sharing Options

Yes, he did it again: 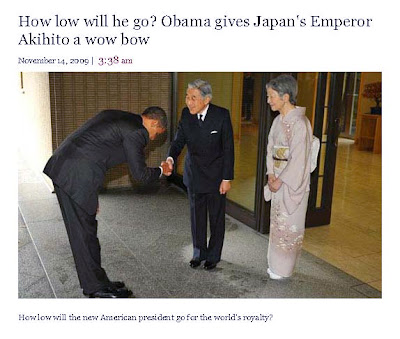 Now the obligatory: When will the NY Times dust off the criticism of Bill Clinton’s “almost bow” to the Emperor?

“IF I see another king, I think I shall bite him,” Teddy Roosevelt once growled. Offered that opportunity with the Japanese equivalent last week, Bill Clinton turned out to have had quite something else in mind.

It wasn’t a bow, exactly. But Mr. Clinton came close. He inclined his head and shoulders forward, he pressed his hands together. It lasted no longer than a snapshot, but the image on the South Lawn was indelible: an obsequent President, and the Emperor of Japan.

Waiting for Little Green Footballs to find a screen shot of Bush bowing to the Emperor.

And Robert Gibbs to deny it was a bow.

And the nutroots to say it’s all good.

Update: Some more on the photo, from The Purple Center.

The guy is such a neophyte. Egad.

Gibbs no longer raises my blood pressure at first glimpse, however. He's becoming kind of endearingly buffoonish — one can't wait to hear the next "spin of the day" coming out of his mouth. It's no wonder that he comes off as being so dizzy.

I would urge everyone not to jump to conclusions that Mr. Obama is bowing to the emporer. Honestly, how can anyone know with any degree of certainty he isn't simply examining the emperor's fine dress shoes?

haha "examining the emperor's fine dress shoes"! I love it!

I was going to say he ducked to avoid a bird.

As a Chinese American who's grand parents barely survived Imperial Japan's brutal occupation of China, I should know. Chinese civilians were required to bow (exactly in the picture) to Japanese Sentries at every checkpoint. Refusal meant instant execution.

This picture is an insult to the survivors of such atrocities as the Rape of Nanking and 'Comfort Women' who are still waiting for a full-fledged apology from the Emperor.

What irony that Obama, a Hawaiian-born, should bow so readily when we're a few weeks from commemorating the attack on Pearl Harbor. Perhaps Obama should bow to the Veterans and the thousands who died in that attack.

Isn't this the original meaning of "kow tow?"

It is also an insult to those good men who died on the Burma railroad. Anybody who was a prisoner of war under the Japanese has just been kicked very hard by a very craven man…. are you really sure that this man is an American citizen? It is not about the birth certificate, it about proving the right to citizenship when you consider that his father was a British or Kenyan subject….

This whole post is absoutely fantastic – from Bow Wow to the point about the Lefty blogs saying it's all good. You hit a ton of nails on the head here. Just wanted to let you know.

Re: Charles of LGF looking for a Bush picture….

You are giving Chuckles too much credit. First he claimed to be above it all; later he simply played the race card. (By puckling a comment from Hot Air, no less.)

He ignored the arguments of the right throughout.