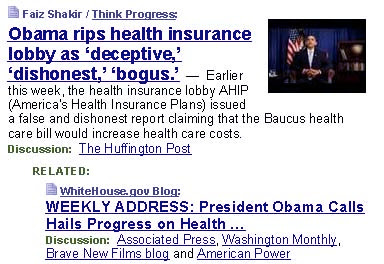 On Saturday morning, Barack Obama gave a rip-roarin‘ speech lashing out at the insurance industry.

Obama finally found his mark, a villain he could love to hate. After months of corporate lobbyist wheeler-dealering, in which Obama’s minions squeezed advertising dollars out of Big Pharma and others, the insurance industry balked at a deal.

So Obama unleashed the Justice Department’s anti-trust division, and most important, the power of Obama’s oratory. The One took on The Bad One.

But it’s too little, too late. Obama may get a bill rammed through Congress in a last minute scramble, but not because of Obama’s power of persuasion.

Obama is so overexposed, that no one is listening or linking. Take a look at the Memeorandum thread above-right (as of 6 p.m. Saturday). Think Progress, ever the loyal Obama media servant, did the write-up on Obama’s speech to get the word out, but almost no one linked.

Considering Obama’s continued slide to 45% in the most recent approval ratings, it’s no surprise. Even the mighty Think Progress cannot generate enthusiasm over an Obama speech.

“They don’t link, they don’t call. After all I’ve done for them.” Or something like that.

The question now is what do we do if they push this healthcare through? Revolt? Sit on our butts for a year and hope the voters (who are notoriously stupid and ignorant) remember what happened to them the previous year and throw the bums out to be replaced with a new crop of useless representatives? Or is there some way to simply not accept the healthcare plan they dump on us?

My question is how the hell do we stop them from passing it, not what do we do if they do. Write and call your representatives at the least. There was a Washington rally which from the pictures compared to inauguration pictures I'd say was at least a million people, but that had no impact. What can we do? All I can think of is to get a petition of those Independent and Democratic voters who are against the bill and get that to Washington. I am an Independent. Basically I feel helpless and ignored.