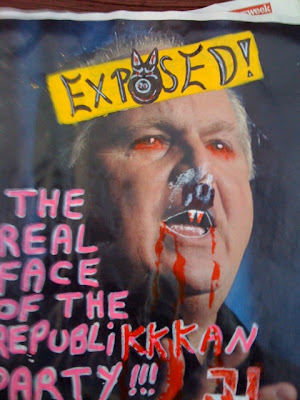 You knew this had to happen. A popular left-wing blog, Jack and Jill Politics, has a photo of Rush Limbaugh as Hitler with blood dripping from his mouth, and “KKK” lettering.

“The Real Face of the RepubliKKKan Party”

The genius posting this garbage was the author of Top 10 Racist Limbaugh Quotes, many of which have been revealed in the past day to be complete fabrications.

Lecture on civility to follow, from Chris Matthews, Keith Olbermann, Alan Grayson, Nancy Pelosi, and the rest of those concerned with the tone of our public discourse.

——————————————–
Related Posts:
No Sanctuary Cities for Conservatives
Al Sharpton for NFL Commissioner
An Allergic Reaction To The Race Card

Don't let a conservative do that to a liberal, though! It would be 'racist' you know!

It isn't even very good.

Character assassination vs. free enterprise. Stalin would be proud.

The class of the left! Check out my blog sometime if you have time…

Don't hold your breath on the lecture coming up!

have they looked into the background of the real member of the KKK? Senator Robert Byrd (D)

I should point out that this particular posting by that person is sufficient grounds for Rush to sue….. it is totally slanderous.

"He was born and raised in Montreal and considers his Canadian-ness not only a point of pride and racial superiority but the basis of his extraordinarily acute understanding of American culture and politics."

I'm just curious as to whether or not Rush will push back and just how far it will get before its "dismissed".

I see via NRO that Rick Sanchez is aplogizing for not fact checking the quotes he slammed Rush with.

Does a public admission of guilt count in libel/slander/defamation?

It's amazing, the left is responsible for over 100,000,000 + deaths during the 20th century purges, now they attempt to portray those on the right bloodied by words they never said, and the most unfortunate part of this is they are given a platform to spread their ignorance and hate.

We'll see what happens now that the source of the false quote has been traced to a NY law firm – who now specialize in sports reprentation. Other changes to Wikipedia entries concerning Sean Hannity and Sarah Palin also come from this firm's IP address.
Nothing would please me more than a Grand Slam:

2.Against A bunch of Liberal lawyers

3. Who happen to be tied in with the Obama Administration

In "Dreams of My Father," Obama expresses his real feelings about the white race, so if you can be a racist and be president, then why can't a man own a football club. I have not heard Limbaugh make the statements that the left has accused him of making, but I don't listen to Limbaugh; however, if a position of power cannot be occupied by a racist then Obama should resign and save us the trouble of impeaching him.

1. Could you clarify what your definition of 'racism' and 'racist' is please.

2. I am a little confused sometimes by liberals enthusiasm for the word 'racist' and 'racism', in for example a matter such as this: For example, if Ms. Limbaugh truly believes, that blacks are inferior to whites; if that is his honest and sincere belief, are you demanding that he lie, and pretend that is not his honest and sincere belief? Assuming that is his honest and sincere belief; surely coercing him, with politically correct fascism 'racist' and 'racism' accusations, are only going to enforce his belief? Surely if you were sincere in your belief that blacks are equal to whites, then if you sincerely want to change Mr. Lumbaughs beliefs, it would be more beneficial to engage him, with examples, and a discussion?

3. I find the use of the word 'racist' and 'racism' extremely pointless. What is the point of accusing someone of being a 'racist'? Mostly, it appears those who use the word, are using to attempt to assert how they, are 'non-racists' and therefore superior to whomever they are accusing of being 'racists'.. but in doing so, they effectively only prove thier own addiction to their own 'superiority'; which they are so desperately attmeing to vilify another for feeling, about someone, or a group of other people.

We are all in many ways superior to others, and in many ways inferior to others. Fact. Get Over it. You obviously think that many people are idiots, who are too incapable of thinking for themselves, when they listen to anything Mr. Lumbaugh has said; and of course if they are idiots, and you are more intelligent, then yet again, you consider yourself superior to the idiots who follow Lumbaugh; and he considers himself superior to blacks. Perhaps he is superior to blacks and perhaps you are superior to his idiot followers, depending of course on how you define 'idiot' and 'superior'. I don't know.

So, perhaps I may change soem of my superior/inferior observations, if i was provided with information and evidence showing my cocnlusions to be incorrect. However, simply accusing me of being a 'racist' or of 'racism'… is hardly going to convince me, that my interpretations of observable reality are incorrect. Only that my interpretation of reality is different to yours. So, wouldn't it be more useful for us, if we actually wanted to find out which of our interpretations was correct, and the true reality, to discuss how we came to our interpretations, isntead of simply screaming 'racist' and 'racism'?

[FYI: I am a Radical Hon(our)sty Eco-Libertarian, which quite simply means, I don't subscribe to the left-right wing paradigm. If or when I consider anyone from the lunatic left, to the lunatic right to say something that I agree with, as an eco-lunatic, I will publicly agree with them, irrespective of whether i disagree on all else; whether the lunatic is Adolf Hitler, Mao, Uncle Joe, Tom Thumb, Charlie Chaplin, Martin Luther or Galileo, et al.]