Posted by William A. Jacobson Friday, September 4, 2009 at 08:42am 0 Comments
More Sharing Options 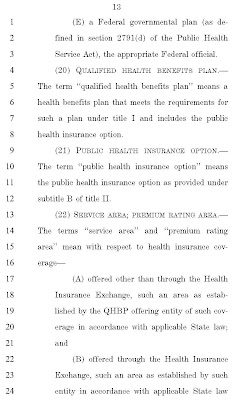 This is the sixth in a series of posts analyzing randomly selected provisions in HR3200, the House Democratic health care restructuring bill. The hope is that through random selection of pages from the House Bill, using the dartboard method, some light will be shed on the otherwise dense House Bill.

The page selected for today’s post is page 13 of the House Bill, which completes the definition of a “QHBP Offering Plan”. When page 13 turned up as the selection, I considered asking for a mulligan. How could I ever write about a defined term. But, it turns out that the concept of a QHBP is a key to the House Bill and effectuates government control over the health care system.

QHBP stands for Qualified Health Benefit Plan. It is the term which defines what is an acceptable health care plan. All “new health insurance coverage and employment-based health plans that are offered” must meet these requirements (Section 101). So while you can “keep your insurance and your doctor,” if you switch plans or if an employer changes plans, you will be part of a QHBP. From that definition and concept flow a myriad of other provisions throughout the House Bill. A QHBP Offering Plan is the entity which offers the health insurance.

For example, Section 121 requires that QHBP’s offer an “essential benefits package” which includes (in Section 122) limits on health cost sharing by patients and a host of benefits. Section 131 establishes “uniform marketing standards that all insured QHBP offering entities shall meet” and Section 132 sets up grievance procedures for participants in such plans, including a review of a claim denial by an outside panel to be set up by the Secretary of Health and Human Services. The determination of this panel is final and binding. Depending upon the regulations passed, it does not appear that there will be judicial review of such decisions, except perhaps on some severely limited basis.

There are numerous other provisions which govern how QHBP’s operate, pay bill and claims, get audited, and contract to provide services.

Failure to comply with all these requirements can result in termination of the QHBP’s ability to offer services through health insurance exchanges (Section 204). For the purpose of the public option (Sections 205 and 206), the Secretary is the QHBP Offering Plan.

The significance of the QHBP is that the government will control every aspect of health care provided by such entities from cost structure to operations to complaint procedures. This is nationalized care for anyone receiving benefits from a QHBP Offering Entity.

This raises an interesting point. To whom does one turn if one is unhappy with the complaint review process at a QHBP? As of now, even at plans under ERISA, there is some level of judicial review, including claims to be reimbursed for services for which the patient already has paid.

Even under an ERISA plan, one can pay privately for services, or receive services for which one is billed, and then seek reimbursement. In other words, you live to fight another day because while reimbursement may be denied under the current system, health services are not denied.

Under the plans for QHBP’s, it is not clear that a patient will be able to pay for services otherwise denied, and then seek reimbursement through the courts. When government decrees that a certain service or product is not to be provided, it is not provided regardless of the patient’s ability to pay.

Under the House Bill, there are no health care mulligans.