Posted by William A. Jacobson Thursday, September 3, 2009 at 09:33am 2 Comments
More Sharing Options 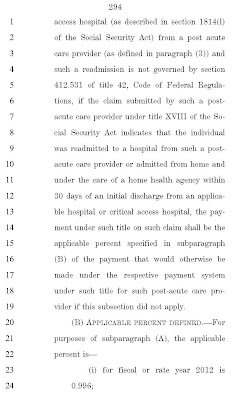 This is the fifth in a series of posts analyzing randomly selected provisions in HR3200, the House Democratic health care restructuring bill. The hope is that through random selection of pages from the House Bill, using the dartboard method, some light will be shed on the otherwise dense House Bill.

The page selected for today’s post is page 294 of the House Bill, which is part of the 19-page long Section 1151, “Reducing Potentially Preventable Hospital Readmissions.” This section is a microcosm of the health care debate, pitting the needs of individual patients against the need of the government to control health care costs.

Section 1151, unlike the other sections at which I have looked, has received a fair amount of attention. According to an analysis in The Wall Street Journal, the problem of hospital readmissions is particularly costly to the Medicare system:

The government spends an estimated $12 billion a year on “potentially preventable” readmissions for Medicare patients, according to the Medicare Payment Advisory Commission, an independent congressional agency. U.S. leaders are trying to reduce such costs as they wrangle this week over how to retool the country’s health-care system. Though private insurers also pay for readmissions, these charges are especially prevalent among the elderly covered by Medicare.

The thrust of Section 1151 is for the government to lower costs by lowering the number of “excess” hospital readmissions. The problem is how to figure out in advance what is unnecessary, how to define and implement it, and how to apply a set of rules to individual patient situations.

(p) ADJUSTMENT TO HOSPITAL PAYMENTS FOR EXCESS READMISSIONS.—
(1) IN GENERAL.—With respect to payment for discharges from an applicable hospital (as defined in paragraph (5)(C)) occurring during a fiscal year beginning on or after October 1, 2011, in order to account for excess readmissions in the hospital, the Secretary shall reduce the payments that would otherwise be made to such hospital under subsection (d) (or section 1814(b)(3), as the case may be) for such a discharge…

The formula for this reduced payment is very complicated, and involves a calculation of base DRG payments which then get adjusted based on the hospital’s readmission rate. Section 1151 spends several pages going through these calculations and adjustments. Section 1151 also contains incentives, through increased payments, for hospitals which implement procedures to eliminate practices which contribute to high readmission rates.

Maybe a hospital administrator could follow the calculation and explain it in plain English, but I cannot. And as with all the other sections I have analyzed, the Secretary of Health and Human Services will have to promulgate rules to implement and further specify these calculations and formulas.

Suffice it to say that someone has spent a lot of time drafting a formula in Section 1151 to create an incentive for hospitals which have high readmission rates to lower those rates under threat of decreased Medicare payments. The key thing is that these calculations do not take into account whether any one particular patient’s readmission was unnecessary. Rather, this is a macro-level analysis of an entire hospital based on “excess” readmission rates.

Patients, however, are micro, not macro. While lowering “excess” readmissions is an admirable goal, penalizing hospitals and excluding individual patient readmissions based on macro-level statistics is a blunt instrument.

An elderly patient feeling ill after leaving the hospital may find readmission personally necessary, but hospital administrators may be hesitant to readmit the patient so as not to throw off the hospital’s reimbursement rates. This creates an issue of individual versus systemic needs. Traditionally, we have focused on the medical needs of the individual, but the thrust of Section 1151 and the House Bill in general is on the needs of society.

By pitting individual needs against societal needs, Section 1151 is a microcosm of the health care cost debate. Once again, we seem to come back to a definitional problem. Whether Section 1151 is good or bad depends on what the definition of “excess” is.

I guess that means that the child with meningoccoal disease (it kills children and teenagers) who has been sent home as having the flu, but needs to be re-admitted will end up dying because of this policy……..

Americans won't tolerate this. For all its complexity, HR3200 is a veritable Swiss Army knife of blunt instruments.