Posted by William A. Jacobson Wednesday, September 2, 2009 at 10:21am 7 Comments
More Sharing Options 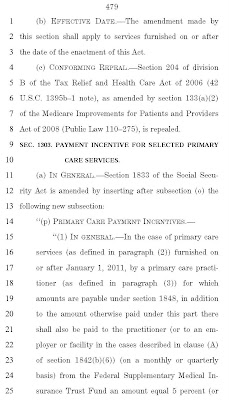 This is the fourth in a series of posts analyzing randomly selected provisions in HR3200, the House Democratic health care restructuring bill. The hope is that through random selection of pages from the House Bill, using the dartboard method, some light will be shed on the otherwise dense House Bill.

The page selected for today’s post is page 479 of the House Bill, which contains the final paragraphs of the 19-page long Section 1302, “Medical Home Pilot Program.” As you will see, whether this is a “pilot” program or a “permanent” program depends upon what the meaning of “pilot” is (I think you know where I am going with this). We may be seeing in Section 1302 the birth of a new home health care entitlement.

I am not going to go line by line through 19 pages in this post, but there are some key points. Section 1302 creates a new section 1866E of the Social Security Act:

Compared to the provisions I examined in the first three parts of this series, this language is relatively straightforward. The pilot program will develop two prototypes, the “Independent Patient-Centered Medical Home Model” (to start within six months with no specified ending date) and the “Community-Based Home Model” (to start within two years for up to five years).

The names of these alternatives are fairly descriptive. The “Independent” model uses private medical providers, while the “Community-Based” model uses non-profits and community organizations. The key aspect of both of these models is payment for physician and other medical services (such as nurse practitioners and nurses assistants) in the home.

The section contains lots of definitions as to who qualifies, how payments are made, and so on. But the key thing here is that so much remains to be fleshed out in regulations to be promulgated by the Secretary of Health and Human Services. “As the Secretary may specify” or “a process” the Secretary “shall establish” or words to that effect are sprinkled heavily throughout the 19 pages.

And this raises a point I have been thinking about throughout this process. As dense and lengthy as the House Bill is in its current form, this is just the start. I am confident that there are hundreds of provisions in the House Bill requiring further regulation, specification, rule-making, and interpretation.

There is a more important aspect, however, and that is the Secretary’s ability to make these pilot programs permanent without further Congressional legislation. After issuing certain evaluative reports to Congress (but without any explicit need to get Congressional approval):

(A) … the Secretary may issue regulations to implement, on a permanent basis, one or more models, if, and to the extent that such model or models, are beneficial to the program under this title, including that such implementation will improve quality of care, as determined by the Secretary.

The only check on the Secretary’s ability to continue the pilot program is the need for a certification from the Chief Medicare Actuary:

The Secretary may not issue such regulations unless the Chief Actuary of the Centers for Medicare & Medicaid Services certifies that the expansion of the components of the pilot program described in subparagraph (A) would result in estimated spending under this title that would be no more than the level of spending that the Secretary estimates would otherwise be spent under this title in the absence of such expansion.

Of course the Secretary will find the pilot to be a success, since the Secretary will be the one developing and implementing the pilot. What is the chance Congress would withhold funding for this program if the Secretary wanted to make the program permanent? You can imagine the howls about how heartless Republicans were “taking away” the “right” to home health care. If anything, the nature of the program is likely to be expanded as to scope and funding needs.

I started out thinking this pilot program language was straightforward. By the end of the analysis, however, it became clear that the clarity was only superficial. There is nothing “pilot” about this program, other than the fact that it is new. What is new is the birth of a new entitlement which never will be taken away and which will grow in cost.

VERDICT: I propose changing the title of Section 1302 from the “Medical Home Pilot Program” to the “New and Permanent Medical Home Program Entitlement.”

Update: Some of the commenters at American Thinker note that the concept of a “medical home” is not new, it essentially is managed care. But what does seem new is the payment by the federal government for such services including services in a “home setting,” which is the language used in this Section. I invite comments on this point, either here or at AT.

In California, the Home Health Care "system" has become a huge boondoggle, complete with union heavy-handedness, fraud, cost overruns, and at any hint of a cutback to "services," the usual melodramatic media stories of seniors left to die in a dark cold bedrooms or filthy nursing homes.

Late in the 1990s, the CA legislature passed a bill to pay people to stay home and take care of their family members. It was argued that this approach would be more humane, less expensive, etc.

Gray Davis had the legislature unionize the workers under the SEIU. Now their wages were set by the state and they had to pay dues.

Earlier this year when CA hit its first of many budget crises, the governor tried to cut the pay for these "workers." The SEIU went straight to the White House to reverse the cuts, threatening a cutoff of stimulus money:

Fresno County was the first to set up a fraud unit, but is badly understaffed. Most counties don't even try to stop fraud.

So, a fraud-ridden, heavy-handed/union-dominated, horribly expensive program is being proposed for the rest of the country.

As goes California, so goes the Nation…

The potential for fraud simple boggles my mind…I literally am speechless. With all the other supremely stupid bad ideas for "health care refom" included in the is bill, this has to take the cake.
Can we stop calling it health care reform and start calling it what it is……entitlement.

California may have bungled a comparable program to the one you examine in Obamacare, but financially it actually makes a ton of sense, if done properly, and really can save money.

As you know, my late life partner, Margaret Ardussi, who had multiple sclerosis, became paralyzed from the chest down in 1992 — and therefore eligible for a nursing home — and quadriplegic over the course of the next two years. We were able to put together enough government help for me to care for her in our home for a fraction of the cost of the nursing home.

The other aspect in favor of such a proposal is that it could allow younger people with paraplegia or quadriplegia in the community and out of nursing homes, where they are currently jailed for the crime of needing too much assistance with activities of daily living. If you are a real opponent of assisted suicide and/or euthanasia, then this is the sort of thing it behooves you to support because it is programs that keep paralyzed people in the community and involved in life that make them want to live. I recently covered the plight of the quadriplegic man in Australia who won the right to die when it looked to me like his real problem is being in nursing home jail without the equipment that would allow him to practice his profession as an economist and live the full, engaged life he could be living. I believe he is being driven to his death by being deprived of the simple care and equipment that would make his life worth living. That is a far cry from his argument that he wants to die because he is quadriplegic.

I have to tell you with every fiber of my being that opposing programs like this is tantamount to supporting assisted suicide and euthanasia for people who need assistance with too many activities of daily living, but who have a life partner or family member willing and able to care for them in their home.

@Cynthia, as you know I am very sympathetic to the needs of people who cannot care for themselves, and home care can be a viable alternative. The question on this post is not whether such care is a good thing, but (a) whether the government should pay for it, and (b) if the government should pay for it, why not have the debate in the open rather than accomplishing it through pilot programs which create entitlements with no public debate or cost estimates on the issue.

I remembered this from a discussion a while back at KeithHennessey.com. This is not about providing care in home as Cynthia was suggesting. This is a comprehensive model of treatment along the lines of an HMO. Obama discussed this early on if I recall correctly. You can read more about it at AAFP. I believe the House bill gives funding for these Home Model organizations to start up around the country and they must provide a business plan in order to qualify.

It's funny that you brought this page up because that discussion hung with me a long time. I thought it was odd that the government could essentially increase competition among service providers without becoming a service provider themselves but ironically were the only ones who could increase competition among insurers. I don't the Medical home model providers were government operated, just given loans to start up that needed to be repaid.

I didn't say it was a bad idea in theory, but the government doesn't do it well. If it saved money, why don't the insurance companies fund it through long term care insurance?

Thank you for taking the time to give another view of this bill. I have read it several times and as you say my mind explodes each time. It is nice to get another take on what is truly mind numbing verbiage.