The “Section 246 Proves Joe Wilson Is A Liar” Lie

The “Section 246 Proves Joe Wilson Is A Liar” Lie 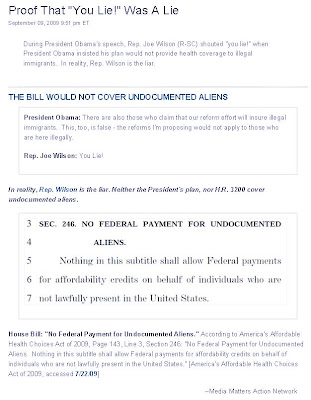 As I pointed out before, whether Wilson or Obama is right on the subject depends upon which health care bill one looks at.

But one thing that struck me is how quickly defenders of Obama on the blogosphere picked up the meme that Section 246 of the House Bill “proved” that Obama was right. Section 246 deals with “affordability credits,” which help people who cannot otherwise afford coverage purchase government-run public option insurance on health care exchanges. Section 246 does not permit the payment of these affordability credits to illegal aliens (emphasis mine):

Nothing in this subtitle shall allow Federal payments for affordability credits on behalf of individuals who are not lawfully present in the United States.

Section 246, dealing with a specific type of credit, does not change the fact that under the House Bill as written — and as Obama wanted it passed before the August recess — illegal aliens would have been full participants in the nationalized health care system.

Illegal aliens would be required to purchase insurance under the mandate requirements, could buy into the public option coverage (which while nominally self-sustaining inevitably would require government subsidies), and could benefit from almost all of the programs created under the bill.

People can debate whether bringing illegal aliens into a nationalized health care system is good or bad, but what is not debatable is that the House Bill would have brought illegal aliens into the system almost completely. The politically contentious issue of outright subsidies for illegal aliens would have been left for another day, but the ground work was being laid. Now that Obama is rejecting such an approach at least nominally that debate is over, although it will be interesting to see how Obama’s words are put into legislative writing.

Realistically, how many people had dug into the 1018 pages of the House Bill to find Section 246?

The answer is that at 9:51 p.m. on the night of Obama’s speech Media Matters, the Democratic media operation, issued an Action Alert claiming that Section 246 was “Proof That “You Lie!” Was A Lie” and that “in reality, Rep. Wilson is the liar.”

In addition to Media Matters’ other distribution methods, that Action Alert was sent out by Media Matters via Twitter [to over 1700 followers] and re-tweeted over 200 times.

The Media Matters meme about Section 246 has been picked up by many bloggers, including Jason Linkins at Huffington Post, who cited Media Matters as having proved that “what’s been completely glossed over by the press is the fact that the ‘You Lie!’ was itself built upon a lie.” A blogger at DailyKos declared “Healthcare Bill, HR 3200 Sec 246 proves Wilson a liar.”

But of course, the fools in the blogosphere who either did not read the words of Section 246 or chose to ignore the fact that Section 246 only applies to “affordability credits” were not to be outdone.

Keith Olbermann, the Fool-in-Chief, went on a rant last night on MSNBC about how Joe Wilson was a liar and wrong. The proof? Section 246!

Here’s the video (starting at 3:00), notice how Olbermann mumbles over the words “for affordability credits” when he reads (at 3:45) the language of Section 246:
[youtube=http://www.youtube.com/watch?v=z-Bf3i3PnUc]

Olbermann yelled at Wilson: “When are you going to apologize for your lack of being right?” How ironic.

As I have said, I don’t think Obama’s being wrong on the House Bill proves that he is a “liar.” The House Bill is dense and hard to understand.

But Media Matters’ successful campaign to spread the fiction that Section 246 “proves” that Obama was correct and that Wilson was “a liar” shows how effective Media Matters can be at shaping an issue. Particularly when there are gullible or deceitful fools willing to listen.

The statement:
"Nothing in this subtitle shall allow Federal payments for affordability credits on behalf of individuals who are not lawfully present in the United States"
deals with crediting providers for medical services provided. So, illegals would not be credited under the system. The issue of eligibility for services is another issue. When democrats refused to agree to deny coverage to illegals, one can only conclude the intent of the bill is to cover everyone regardless of legal status, or not.

The affordability credits is the only part that matters. Think this through a little bit!

If everyone is required to purchase insurance, then we WANT illegal immigrants to fall under that requirement, without receiving credits. Every illegal that did buy insurance without credits would be a contributor to the system, instead of leeching free care at the E.R.

Illegal immigrants with resident alien status are obligated to pay income tax under current law. Some do, some don't. The ones that do are at least returning revenue to the system that provided services to them. Requiring them to purchase health insurance would follow the same logic, and as long as we are not directly subsidizing them, they are getting nothing but what they pay for.

As judge Nepolitano at FOX accurately pointed out that even if the bill excluded illegal aliens it would be challanged in court based upon class discrimination. Since they live in America the section of the the healtcare bill that excluded them would most likely be found unconstitutional.

In other words the point is that you can not have a Federally mandated health insureance program and exclude a class of people living in America without it being unconsitutional.

In fact most likely if the Republicans had gotten their way and inserted wording into the helathcare bill specifically excluding illegal aliens the SCOTUS would have found that part of the bill unconstitutional and it would have to be removed.

So therefore for all intents and purposes a national health care plan has to include illegal alients.

Why is no one focusing on the effective date of this legislation? If that date is in 2013, why is it such a priority to pass it now? I would think that this would generate some attention. Follow the money… or, follow the election ramifications… at least, ask the question "why."

Also, I have a close friend who, after years of earning glowing reviews at United Healthcare, made an impolitic comment questioning UH's support of this legislation, is systematically being escorted through the intersection of change by his management and HR. Only 1-2 months after asking his question at a team meeting, he suddenly receives a poor review. The barbarians are at the gate.

Also, I slightly taken aback that Jacbobson fell for all this "illegals will be getting ObamaCare" mess–the Exchange has nothing to do with TAXPAYER funding of illegals–merely the ability to purchase.

Section 246 DOES prohibit any benefits to illegals.

That is fact. Not some kind of conjecture.

Doubtful at this point whether this would ever be changed under the "case law" some think is the Constitutional smoking gun.

I know I'm late on the draw here, but still.

This is serious, so I hope you see this.

Napolitano did say what you suggest, but here is the take from another conservative/libertarian type who figured out some DETAILS of the case law the good judge cited. It's not exactly what he says, and here's the problem of the context Napolitano cited:

Napolitano argued that, since the term “person” rather than “citizen” is used in this provision, illegal immigrants cannot be denied core government benefits while they reside in this country; i.e., their illegal status does not matter when it comes to government entitlements that other persons in the United States receive. He referenced a Supreme Court decision holding that children of parents who are illegal immigrants cannot be denied a public education.

Napolitano’s reasoning is faulty on several counts. First of all, the case that he was most likely thinking of — Plyler v. Doe – was the product of a much more liberal court and even then was decided in 1982 by a 5-4 vote. It is ripe for being overturned by the more conservative Roberts Court, especially given the sharp increase in the number of illegal aliens in this country since 1982 — a number that would swell still further if those illegals become entitled to the same health benefits as U.S. citizens and other legal residents.

Secondly, the Plyler decision focused on:

the discrete class of children not accountable for their disabling status. These children can neither affect their parents’ conduct nor their own undocumented status. (Emphasis added)

Napolitano is extending that reasoning to protect the adults who violated the law and are accountable for their actions, as well as their children. At most, if the Plyler case remains intact, only the children (who “can neither affect their parents’ conduct nor their own undocumented status”) should be permitted access to insurance coverage. As I said, I expect that this decision will be overturned — or at least considerably narrowed to apply only to its unique facts.

Third, even this case recognized that illegal aliens are not constitutionally entitled to all government benefits. Congress is entitled to draw distinctions among classes of persons, where the distinctions have a rational basis that advances a legitimate government purpose. If this were not true, then Social Security benefits would have to be made available to all illegal aliens, and it would not be illegal for employers to hire illegal aliens — an oxymoron to say the least. The net effect would be to reward those who had managed to enter and stay in this country illegally — rendering them de facto legal residents for all intents and purposes.

Fourth, illegal aliens already have access to some measure of health care — the emergency rooms of hospitals – in the event that they need medical attention. Opening up the public option, if there is one, to illegal aliens will only encourage even more illegal immigration. In addition, it will overwhelm the health system with far more people seeking medical services than there are doctors to supply them, forcing the rationing of care that will impinge on the health and well-being of all legal residents in this country.

Having said all this, it is quite possible that Judge Napolitano will end up being right after all. But the multi-faceted dimensions of this complex legal issue deserved more than the superficial discussion we heard on The O’Reilly Factor.

Also, let's just be honest here, the issue Jacobson is discussing is in regards to the Exchange where it is more clear to most that you could PURCHASE a health insurance voucher.

That should not make us nonplussed about all this.

It's not as if "free", taxpayer-funded stuff is heading the way of illegal immigrants willy nilly with nothing on their part required.