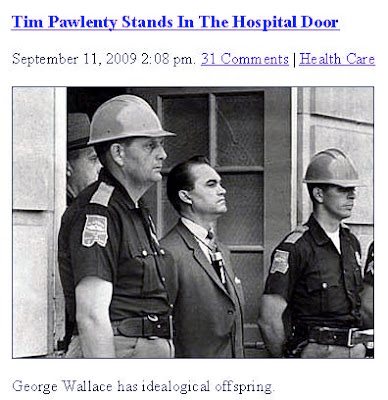 Oliver Willis compares Minnesota Gov. Tim Pawlenty’s statement that Pawlenty would consider whether the 10th Amendment allows a state to opt out of a potential federal health care plan with to George Wallace standing in the doorway to bar blacks from the University of Alabama.

Here is the quote from Pawlenty that gave rise to Willis’ over-the-top analogy:

“Depending on what the federal government comes out with here, asserting the 10th Amendment may be a viable option but we don’t know the details. As one of the other callers said, we can’t get the president to outline what he does or doesn’t support in any detail. So we’ll have to see. I would have to say that it’s a possibility.”

Doesn’t sound like Pawlenty had a racial motivation for being willing to consider what was best for his state to the extent permitted under the U.S. Constitution. In fact, a Governor would be derelict in duty not at least to consider what constitutional options a state had to oppose a misguided federal policy.

So why use the George Wallace analogy, with photo and all, except to smear Pawlenty and others who oppose Obama’s health care proposals as racists.

Will the use of the race card never stop? Have people like Willis never heard of the concept and consequences of crying wolf?

Politicized accusations of racism are so commonplace at this point as to have lost all meaning. Happy now?

When the radical left has no argument at all they point an accusing finger and spit out the word, RACIST!!!

It is meaningless, but it's what they do.

It's a slam dunk. Hey! I found out I'm a racist because I don't like Bud Light or "spicy mustard."

Yes. That is the bottom of the deck.

As long as they find the race card effective…. they will continue to abuse it, I'm afraid.

I'm kind of okay with them doing things this over the top. Its so beyond the pale (wait, is that racist?) that it hurts them far more than it hurts the object of their scorn. Its sickening, and it certainly is undignified, but the more they toss this stuff around willy-nilly, the more ineffective it becomes.
If the Left had just practiced a little bit of self restraint, rather than screaming 'racist' at anyone who disagreed with Obama on anything for the last two years, they might really have been able to do some damage with the racism charge. As it is, nobody who isn't already a die-hard supporter pays attention anymore.

Ayn Rand's ATLAS SHRUGGED puts this guilt card strategy into perspective. Currently Race is the useful distortion for extorting concessions. As long as there's white guilt, there's going to be plenty of outlandish plays to get opponents to surrender, concede or just abstain from action. Notice a similar coercion going on with global warming – the hope is to guilt people into drastic concessions because their power plants, their cars and their lungs pump CO2 into the air. Folks, if they convince you to feel guilty because you breath out CO2, then you're at the rock bottom; you've voluntarily surrendered your right to be alive.

Mr. Jacobson, as a lawyer, you must know of the futility of taking a 10th Amendment approach to what Gov. Pawlenty asserts. Surely, if he doesn't understand Constitutional Law, then I suspect he has attorney's that do understand it. Therefore, since his statements are absurd on their face, what is his motivation for taking such an untenable position? Surely, as a White Republican, racsim is a good bet.

Anybody know why my comment did not get posted? Is there some kind of censorship going on?

@Paul, The comments here are "moderated" which means that they don't show up until I hit the "accept" button, which also means that if I am sleeping or away, which sometimes happens, there can be a delay in comments appearing. You should have received a simmilar message when you entered the comment.

So I'm trying to figure out why he's still here. Does he not realize the sheer hilariousness of that and his post.

"Surely, as a White Republican, racsim is a good bet."

Paul, WTF are you talking about? In a state where the majority of the people are white, if him invoking the 10th on health-care equals racism, then he will be committing a racist act mostly against white people.

So he can't be racist. To be racist implies that he dislikes other races, but cherishes his own race. So he must have some deep seated psychological issues with his whiteness. That explains everything!!

Either that or Paul is just another nitwit reaching for that oft overused race card because he's run out of arguments. However, in doing do, Paul has betrayed himself as, at least intolerant, if not racist with his blanket stereotyping of an entire group of people.

Didn't you learn in liberal camp that's not OK? Methinks you need to return to "The Death Camp of Tolerance" for a reminder.