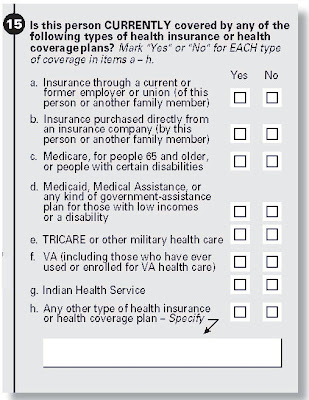 I haven’t paid much attention to the upcoming 2010 Census, until the recent death of part-time Census worker Bill Sparkman, whose death under unclear circumstances is being shamelessly exploited by left-wing blogs.

Yes, the Census questions are highly intrusive, asking about household plumbing, how many people live in the house, etcetera. On a personal level, my natural inclination would be to say “none of your damn business” as to many of the questions.

But most of these intrusive questions have been asked for decades, and in some cases, for centuries. This doesn’t make the questions any less intrusive, but it is hard to claim the 2010 Census is out of the ordinary as to most of the questions.

With one exception. The Census document listing the questions which will be asked reflects a new multi-part question (beginning at page 68 [of the pdf., page numbered 58 of the report]), which collects information regarding health care insurance coverage. Question 15 on the new Census asks whether each of the following forms of insurance apply to each person in the household:

a. Insurance through a current or former employer or union (of this person or another family member)
b. Insurance purchased directly from an insurance company (by this person or another family member)
c. Medicare, for people 65 and older, or people with certain disabilities
d. Medicaid, Medical Assistance, or any kind of government-assistance
plan for those with low incomes or a disability
f. VA (including those who have ever used or enrolled for VA health care)
e. TRICARE or other military health care
g. Indian Health Service
h. Any other type of health insurance or health coverage plan – Specify

The Census explanation for adding this question is as follows:

This question was added to the American Community Survey (ACS) to enable the U.S. Department of Health and Human Services and other federal agencies to more accurately distribute resources and better understand state and local health insurance needs.

Planning and implementing many federal health programs requires accurate state and local information on health insurance status. Obtaining data on the uninsured rate among Americans is of great importance to policy makers at federal, state, and local levels.

This question on health insurance coverage is completely new. In light of Democratic proposals to tax people without “acceptable” health coverage, and if need be to imprison such persons if they fail to pay the health care tax penalty, this new Census question takes on significance.

The Census, which includes personally identifiable information regarding household members, forms yet another potential basis for government enforcement of a health care mandate.

Census Bureau privacy policies protect individual information from disclosure. But those policies, and the federal laws under which they operate, are subject to change. There is nothing, other than political will, to prevent Congress from changing the law to provide the IRS access to individual insurance coverage information collected under the Census, for the purpose of comparing that data with other data collected by the IRS.

Likely? Well if you asked me two years ago whether the government would tax people for not having health insurance, and would be willing to send such people to jail if they didn’t pay the tax, I would have said you were out of your mind. Had you further told me that the IRS would receive individual health care insurance information, I would have told you to get some rest.

So I will tell you you are out of your mind if you think individual Census data on health insurance coverage would be turned over to the IRS. Of course, in two years, on the eve of the health care mandate taking effect [assuming the Democrats pass their plans], what now seems completely crazy may simply be viewed as a sane part of enforcing the health care mandate.

——————————————–
Related Posts:
Of Course You Will Go To Jail
Ghouls Preparing To Dance on Sparkman’s Grave
Get Rid of the Mandate
IRS The New Health Care Enforcer

Maybe jfrancis will drop by and tell us how objecting to a census question will lead to domestic terrorism. 'Cause it like totally will…and stuff.

We should all emulate the great Senator from Illinois, Barack H. Obama, who bravely and repeatedly voted "Present" on legislation he did not want to be held accountable for his vote, or was too busy running for office to read, or didn't have the cojones to take a stand on!

We, however, should do so on principle and boldly write "Present" on any question the Census Bureau asks, that we believe to be too intrusive into our personal lives, or unnecessary on the part of the government. (Besides, it's shorter than "None of your business"!)

What is the legality, anyway, of effectively answering "none-a-yer-business" on any of the census questions? I don't mind answering who's in the house, age, and relationship questions, but it seems to me that the rest of it (race, income, insurance, etc.) truly ISN'T anything I'm required to answer….

Just another way that government tries to intrude in the lives of individuals.

Medicare, the federal government's current Healthcare Plan, will be bankrupt in 7 years. Instead of shoving all of us into a similar delivery system, why not VOTE? Lets demand a PUBLIC REFERENDUM on healthcare. Vote America. Let our voices be heard…

My only answer for the Census is "2"

The only requirement specified by the U.S. constitution is a head count. All other information gathering is specified under Title 13 of the U.S. Code.

Fines of $100 to $500 can be imposed for false or non answers. Those fines are rarely imposed.

I shall continue to do for this census as in years past: A head count in my household of those over 18, and those under 18. Period