Washington Post business hysteria-generating columnist Steven Pearlstein has declared that opponents of Democratic health care restructuring are “political terrorists, willing to say or do anything to prevent the country from reaching a consensus on one of its most serious domestic problems.” Oh, okay, next time we’ll be sure to shut up and go along with what Pearlstein wants.

But not this time. Contrary to what Pearlstein says, the goal of the Democratic party base is a single-payer system in which the government controls the health care system. Pointing out this goal, and how some of the provisions which may make their way into a final bill would advance this goal, is not the equivalent of hate speech or fighting words. In fact, the rhetoric from supporters of health care freedom has been no worse, and mostly better, than the rhetoric used by Henry Louis Gates, Jr. on his front porch, which has been defended by the very people who want to shut up the health care protesters.

And yes, the only way to fund what the Democrats want will involve rationing which will cut back on end-of-life care. So while no Democrats are talking about a Soylent Green solution, the necessary implications of what they are proposing legitimately is frightening to the elderly.

Part of the problem with how things are spinning out of control is people like Pearlstein, who use their mainstream media platform to demonize everyone who disagrees with them.

Just one question for Mr. Pearlstein. Now that you have declared approximately half the population to be terrorists, are you still against waterboarding? 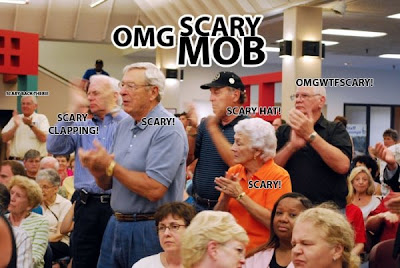 In addition to Pearlstein's ludicrous characterization of people exercising their First Amendment rights as "political terrorists," we have Krugman today basically saying opposition to health care "reform" is racist.

My question is, if the proposed reforms are so fabulous, why are the Democrats not trumpeting their fabulousness? Why, instead, are they spending all their time smearing opponents (i.e. killing the messenger)?

If you have a proposal that can stand on its merits, you highlight the merits. If it can't, you call your opponents racist. I think we know what that indicates about health care "reform."

"who use their mainstream media platform to demonize everyone who disagress with them"?

St Louis tea baggers start riot at town hall, most were bused in or drove from other idstricts just to disrupt discussion of issues.

in town hall after town hall if a representative does get a chance to speak tea baggers just start shouting liar, obama wants to kill us.

certainly nothing I've written will sink in. the tea bagger mentality doesn't allow for facts, civil discussion or the freedom of others to speak or to gather information.

"Five rightwing myths about health-care" highly recommnded column at Salon for those that care about the truth. Facts from the actual House bill.

Funny–your side got all up in arms pretty much every time Code Pink (who didn't represent mainstream opposition) got disruptive at Republican events, and applauded as they were arrested and led away, but you're all good with physical intimidation and completely shutting down events when it's on a subject you don't like. Gotcha.

Physical intimidation? Oh god you poor liberals must have suffered for oh the longest time!!

After years of polticans turning poltics into a religon that can't be questioned With Obama being the King of that kinda of cult of personality rhetoric. This is quickly moving away from the issues and more about them vs us. which will only end in more volance.

Pegy Noonan wrote today, that if Obama would speak against this "war" and call off his union dogs it would defuse much of the anger. But I guess that would take a stateman and not politican.