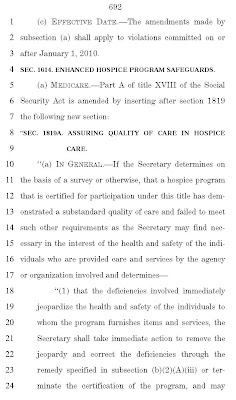 This is the second in a series of posts analyzing randomly selected provisions in HR3200, the House Democratic health care restructuring bill. In the prior post, I examined the almost incomprehensible section 1721 concerning payments to primary care practitioners.

The page selected for this post, using the dartboard method, is page 692 of the House Bill which contains the final paragraph of Sec. 1613, “Enhanced Penalties for Delaying Inspections.” As set forth below, the title is apt. The section gives the government a huge hammer, in the way of sizable daily penalties, to ensure that providers and suppliers to federal health care programs permit federal officials access for inspections.

Section 1613 amends Section 1128A(a) of the Social Security Act (42 U.S.C. 1320a–7a(a)), “as amended by sections 1611 [enhanced penalties for false statements on provider or supplier enrollment applications] and 1612 [false statements in support of a false claim]” of the House Bill, by adding penalties where a person:

Looking at the cross-references, this is part of increased fraud penalties in the legislation, in this case having to do with providers and suppliers under any federal health care program. Section 1613 imposes penalties for any provider or supplier who refuses to grant access for an inspection under applicable regulations.

But determining the exact application is very tricky. The proposed amendment says that the penalty is determined using the following formula:

It is hard to figure out this language, because of the use of the words “in the matter” and the reference to “paragraph (3).” There may be a logic to this wording, but it is not obvious. I think it means that penalties for violation of this new paragraph 10 will be $15,000 for each day on non-compliance. So if someone delays for a week, the penalties would be $105,000.

Unlike the provisions of section 1721, examined in the prior post, these penalty provisions are not incomprehensible. But they are hard to follow, requiring a time-consuming comparison of existing statutes and other provisions in the House Bill.

Is this a good thing? The positive is that fraud in government health care programs is rampant, so anything which gives the government additional investigative tools could be helpful.

The downside is that government is given substantial new powers, under threat of heavy daily fines, allowing it access as, if, and when it deems necessary. Certainly, one can imagine scenarios where a person believes the government is acting unreasonably in requesting access, but the fear of daily penalties would put such person at severe financial risk.

VERDICT: The lesson would be that if you do business with the government health care system, your business is an open book subject to inspection and access at any time.

The inspections are necessary when there is suspicion of fraud. What it does however, is to take away the privacy of patient records.

Here in Australia we continue to have Medicare fraud. Medicare is the current name of our health system. The latest scandal involved a doctor who was bulk billing and what he billed was way above what he should be charging for the appropriate number of patients. In other words he was billing for patients he had not seen.

The Schiavo case was one where there was some pointing of fingers of fraud within the Medicare and Medicaid systems. However, I never did here if the hospice was audited or that they were charged with obvious fraud… Schiavo was not dying and she should not have been held at that hospice. However, Schiavo is in fact a side issue for the fraud that was probably taking place.

For comparative purposes you might want to see if you can find the equivalent Australian legislation and what it lays down for allowing the authorities to audit doctors and hospitals as they seek to root out the fraudsters.

I am not sure that the provision you provided is all that good. It provides heavy penalties but it does not set down a good mechanism for annual audits of doctors etc within the system.

And you are a lawyer….just what are the rest of us who are not lawyers supposed to do with this written foreign language?