No one has been able to get a full grasp on the scope of the health care system restructuring proposed by the Democrats. I have written extensively on some of the more interesting tax provisions, but I only have scratched the surface. The pending House and Senate HELP Committee bills are the size of a major city phone book.

So I decided to use an approach I have seen on television, where a reporter randomly throws a dart at a map of the United States, then pulls the phone book for whatever location was selected, picks a page and person randomly out of the phone book, then visits the person to get his or her life story. Often the result is interesting, although sometimes quite boring.

For the Democratic proposals, I’m going to work off of HR3200, which also is known as the ‘‘America’s Affordable Health Choices Act of 2009,’’ but for current purposes, the “House Bill.” I’ve chosen the House Bill, rather than the Senate version, because the House Bill is just over 1018 pages, which works better with my random selection method. The Senate bill is 615 pages, and contains some real doozies, so I hate to pass up the opportunity, but the House Bill will work better.

I will look at my Sitemeter page count for seven straight days, and whatever the last three digits are on the page count, I will turn to that page in the House Bill. I will use whichever section of the House Bill appears at the top of the page, even if the section starts on prior pages.

I will try to explain what the section and provisions on the page mean. There is no guarantee that I will be able to do so, as some of these provisions may be incomprehensible. The fact that a particular page or section is incomprehensible is interesting in itself, considering there are over 1000 pages. I invite readers to post comments with alternative explanations, and corrections to my analysis are invited. Here goes. 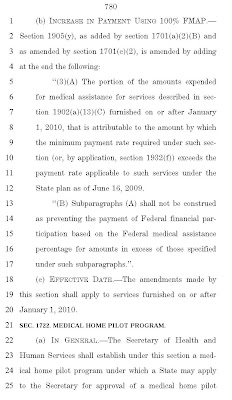 Section 1923(f) of such Act (42 U.S.C. 1396u–2(f)) is amended—
(A) in the heading, by adding at the end the following: ‘‘; ADEQUACY OF PAYMENT FOR PRIMARY CARE SERVICES’’; and (B) by inserting before the period at the end the following: ‘‘and, in the case of primary care services described in section 1902(a)(13)(C), consistent with the minimum payment rates specified in such section (regardless of the manner in which such payments are made, including in the form of capitation or partial capitation)’’.

In case you were wondering, I already regret this undertaking. I don’t know if I can keep this up for seven straight days. This section, what it means, and what it does, is all but incomprehensible. And to think, I could be weeding the garden.

But whatever it means, on page 780 of the House Bill, the Democrats propose to increase payments using “100% FMAP” (Federal Medical Assistance Percentages) under this new section “(C)”:

(3)(A) The portion of the amounts expended for medical assistance for services described in section 1902(a)(13)(C) furnished on or after January 1, 2010, that is attributable to the amount by which the minimum payment rate required under such section (or, by application, section 1932(f)) exceeds the payment rate applicable to such services under the State plan as of June 16, 2009.

(B) Subparagraphs (A) shall not be construed as preventing the payment of Federal financial participation based on the Federal medical assistance percentage for amounts in excess of those specified under such subparagraphs.

VERDICT: Close to incomprehensible. I think this means that there will be an increase in reimbursements to states for payments to primary care physicians under Medicaid. I could be wrong. There are so many cross-references, that it would take hours to figure out the full implications and all the conditions to which such payments are made, much less the source of revenue for the payments.

What this section does show is the density of the House Bill. Understanding just this single provision is a daunting task. Call it the banality of bureaucracy. Someone, be it a lobbyist or staffer or both, spent an enormous amount of time writing this dense text to accomplish something which is not explained in a form almost anyone could understand or comprehend.

"I already regret this undertaking."

I love your idea and hope your Sitemeter falls on a friendlier page number tomorrow.

Sometimes I think the authors of these bills sit around getting drunk and putting clear, concise 40 page bills through a gobbledygook generator to create incomprehensible gibberish just for kicks. Then I wake up and realize the bureaucratic legalese serves a more sinister purpose than their own entertainment.

Good luck with your "throwing darts" experiment. I think it's a wonderful idea and believe your method may unearth something interesting.

How 'bout this commentary by Thomas Jefferson:

"Laws are made for men of ordinary understanding and should, therefore, be construed by the ordinary rules of common sense. Their meaning is not to be sought for in metaphysical subtleties which may make anything mean everything or nothing at pleasure." (Letter to William Johnson, June 12, 1823)

Jefferson's wise rule of thumb applies only if the lawmaker has a general intention that the law should be understood and followed!

Something else afoot in the House Bill, obviously.

I like the idea of searching the document at random. It shows that you have not sought out any particular hobby horse to ride, or bring any prejudice to the text.

Unfortunately, the bill appears to stink through and through so you should have good hunting!

Jesus! You've struck the mother lode! This year's "Who Wants To Be A Millionaire?"

Your selection method is good, too. I understand that was how they would come up with the day's winning number, except they'd use the amount wagered at Hialeah or something like that.

There used to be a show where they'd take somebody famous and round up his fifth grade piano teacher and the old guy whose dog used to chase him when he was stealing apples and they called the show "This is Your Life."

You could use that as the title for your dart game.

Re: FMAP 1902 – It appears that each state has a published percentage by which their average income varies from the average of the entire nation, and that variance is used to adjust payment to medical providers from some stated amount. This is for Medicaid. It sounds like FMAP would be done away with. It would seem to me that doctors would move to areas where the cost of living is lower as a result.

The FMAP reference to section 1848 supposedly amends existing Medicare law. However, under section 1848 (j), there is no (5) and no (A) under that. So the bill may have other sections that create the newly-amended 1848 (j)(5)(A), or perhaps another law was just passed and the referenced section has not yet been appended into it in the online version. The section as written is not a complete sentence but maybe definitions are written that way.

It's truly Byzantine law. And when you realize that the drafters know the sections, sub-sections, sub-sub-sections etc. intimately enough to amend them like this, you deduce that the law is not written by the "lawmakers" but by lawyers working for affected groups. Henry Waxman certainly did not write this; there is a video of him on YouTube where he asks his staffer what the legal drinking age is. These drafters know the existing statutes by chapter and verse.

How can can leftist legislators maintain enthusiasm for a bill they haven't read?