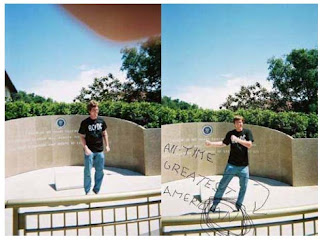 Four years ago, someone published photos of a guy dancing on Ronald Reagan’s grave. The photos were posted also at the “Princess Sparkle” blog, with this commentary:

I’ve never met the sassy youngster in the above photos, but he’s a Pony Pal™ by default. What’s he doing? Why, he’s dancing –and cutting a mean ol’ rug from the looks of it– on Ronald Reagan’s grave. The intrepid discoholic then triumphantly posted the photos on this message board, and now Wing-Nut Daily has her panties all in a bunch over it. And they’re out for blood. Or jail. Or an anti-Republican-grave-desecration amendment, or something. Just wait ’til Anne Coulter hears about this, then the fur will really fly.

And to top it off, the blog post featured the same guy pissing on Nixon’s grave.

So when you hear people complain that Republicans are dancing on Ted Kennedy’s grave, figuratively speaking, let’s (1) hope it doesn’t happen, (2) keep in mind that it is Democrats who are using Kennedy’s death for political purposes, and (3) remember it happened to Reagan, literally.

I wouldn't lower myself to dancing on the fat sandwich-maker's grave.

The Dems are spending more time watching for any false moves by Republicans and conservatives than they are grieving themselves. You nailed it, the Dems are completely politicizing Kennedy's death.

Ted Kennedy pissed all over Mary Jo Kopechne's grave every time he told or solicited jokes about it.

Maybe his penchant for Chappaquiddick "humor" is why he named his dog "Splash."

No, I'm not making that up.

You may have the right, but not the willingness to pay the price.