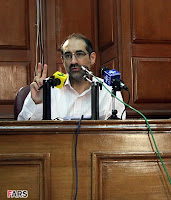 Iranian/American dual citizen Kian Tajbakhsh has a Ph.D in Urban Planning from Columbia University. Tajbakhsh was arrested in Iran in early July as part of a crackdown by the Iranian regime on moderates and leaders of the protest movement.

Last week, Tajbakhsh and approximately 100 other moderate political and academic leaders were put on trial charged with fomenting the rioting which rocked Iran in June over election fraud. As reported by the NY Times:

Iran began its first trial of the post election crisis on Saturday, a mass court case against more than 100 activists and protesters accused of plotting a ”velvet revolution” to topple clerical rule.

Some of the most prominent politicians of the pro-reform movement, including a former vice president, were among the defendants brought before the court in gray prison uniforms. A number of them delivered confessions, according to the Iranian media….

A prosecutor used Saturday’s hearing to press the government’s claims that the opposition is a tool of foreign enemies. He accused the three biggest opposition parties of receiving money from foreign non-governmental organizations as they plotted a government overthrow.

The charges, read out in court by the prosecutor from a 15-page indictment, included attacking military and government buildings, having links with armed opposition groups and conspiring against the ruling system, Iran’s official news agency, IRNA,reported.

Opposition leader Mir-Hossein Mousavi has called the trials a sham. Tajbakhsh denies the charges. (Photo of Tajbakhsh on trial above The Columbia Spectator.)

This is the second time Tajbakhsh has been arrested by hardliners. In 2007 he was arrested for sedition and held for several months. (Photo below of Tajbakhsh and his family taken after his release from prison in 2007 via Irish Times.) 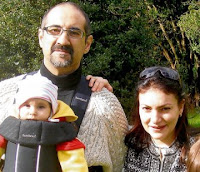 Unlike Euna Lee and Laura Ling, the journalists who were rescued from a North Korean prison by former President Bill Clinton, there does not appear to be much hope of Tajbakhsh being released. Although the Obama administration has called for Tajbakhsh to be released, it has has not elevated its efforts for Tajbakhsh as it did to secure the release not only of Lee and Ling, but also Iranian-American journalist Roxana Saberi.

The blog Free Kian 2009 has updates and links regarding the case.