The Gay Marriage Slippery Slope Is Back

The Gay Marriage Slippery Slope Is Back 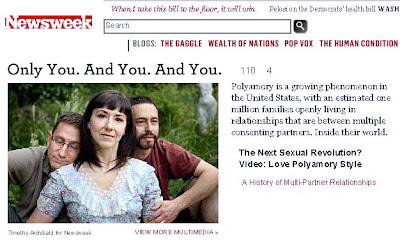 Will Newsweek ever stop trying to get attention by declaring things coming to an end?

First it was the end of Christian America. Then the end of the recession. Now the end of monogamy as the basis for socially acceptable relationships, in a lead article captioned:

The article is sure to re-ignite the slippery slope argument over gay marriage, that legalizing and institutionalizing gay marriage inevitably will lead to the requirement of similar treatment for polygamous polyamorous groups of people. One counter is as follows:

But doesn’t this start us down the slippery slope to hell? No. Consider first the case of polygamy. People are capable and some desire lives intertwined with more than one person. Couldn’t three people make decisions as a unit and wouldn’t this argument require affording the legal status to all of them? No. The purpose of civil marriage is to make sure that the location of rights and responsibilities is perfectly clear. Polygamy would not only not make these issues unambiguous, it would entrench further ambiguity into the law. It would do the opposite of what civil marriage is meant to do.

And a counter to this counter is:

Dismiss it, if you must. Be offended, if you choose. Send hate mail, if you’re inclined. But allowing two people of the same sex to declare themselves “married” renders the whole institution meaningless and opens the door to legally recognizing other “inimical” relationships. Perhaps 10 years from now, those cases will make headlines.

Say what you will, slippery slope arguments often work in the legal context:

But it seems to me that decisions such as the California, Massachusetts, and Vermont ones illustrate that it’s a mistake to just factually dismiss the claims that slippage is possible. When we’re dealing with a legal system that’s built on analogy and precedent (both binding precedent and persuasive precedent), slippery slope risks have to be taken seriously.

Newsweek knows how to get attention, and sex and sexuality sells. Newsweek, however, does not know how to break out of the doctors-office-magazine-rack hell it is stuck in.

How about this for the next Newsweek cover: “The end of the world is near!” That ought to generate a few hits, but probably not any paying subscribers.

UPDATE: For other views, Defend Marriage as an Institution to Avoid Slippery Slopes and Homosexual equality has nothing to do with slippery slopes

I'm waiting for this Newsweek cover: "The End of Newsweek! Our Farewell Edition."

Legal Context? That's so pre-Soto. It's all about feelings now. C'mon Professor, where's your empathy?

I think the slippery slope arguments are quite persuasive. Either society defines marriage narrowly (in the interest of strengthening and stabilizing the family), or marriage becomes some kind of god-awful chimera pieced together by various special interest groups.

My father subscribed to Newsweek. As a kid, the only part of it I could pretend to understand were the political cartoons and some of the movie articles, but once I was old enough, I started reading more. In 2007, taken with some of the early election season coverage, I decided to purchase a two-year subscription.

That subscription comes to an end soon, and I have no intention of renewing it. Here's a link to a letter I wrote to the editor explaining why:

Monogamous marriage is a Roman custom imposed on Judea (and much of the rest of the world) by force.

It may have many advantages. It may often be especially romantic. And beautiful*. But it is neither natural nor inevitable nor particularly biblical (before the time of the Roman occupation).

* Precisely because it is unnatural, counter-instinctual, and difficult. Just like running through a burning building to save a stranger who isn't even genetically related to them is noble and human.

Actually, the import of Griswold v Conn is that any consensual sex between adults is legal. This includes polygamy and prostitution. The only questions are what is consensual and who is an adult.

If only there were some way for different states to have different marriage laws and where people were free to move to the state with the laws they felt were best.

Too bad that all laws must be universal. It sure would be education for people to try living under the laws they prefer.

I think the definition of marriage that suits me best includes the ability to consecrate. Only a man and a woman can do that, regardless. Now we are looking at this? Polymory? These people are polymorons.

Liberals are way too into sensationalism; defining the individual levels of race, ethnicity, sexuality, and lack of religion (or at least Judeo-Christian upbringings).

I truly could care less about someone elses personal and private lives.

I think this topic will fade as individual states elect to vote the topic.

Civil unions, sure. Equal fields…somewhat. Sorry, but if you do not have an innie + an outie is does not equal the word "marriage" to me.

I once was agnostic on this subject, until I listened to a very radical and very loony person stating riots in the street and no one safe. That is when I had a change of heart and thought about the world my two children will have to pick up and work with.