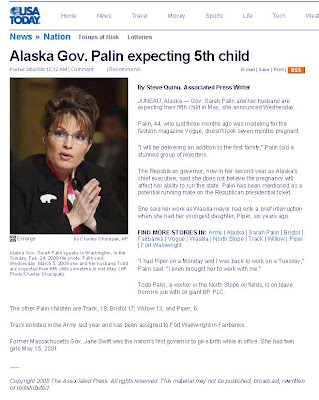 Andrew Sullivan is back on his Trig Palin birther hoax theory, that Sarah Palin is the grandmother and Bristol Palin is the mother. Or what Sullivan calls And The Story The MSM Still Won’t Touch.

Sullivan has no evidence, just unanswered questions. That’s all it takes for an internet rumor to take hold.

In order for Sullivan’s theory to be true, the scope of the conspiracy of silence must be massive, almost on par with the Israeli conspiracy to bomb the World Trade Center and to set up al-Qaeda as the fall guys [note to the humorless watchers, this is a joke].

Sarah Palin officially announced that she was pregnant no later than March 5, 2008 (see USA Today article, above right). Which means that if this is a hoax, at least all of the following people have been in on the conspiracy and have kept their vows of silence for over a year:

Hundreds, maybe thousands of people must be keeping this secret, in order for Sullivan’s theory to be true. The more people keep silent, the more Sullivan believes. The lack of evidence becomes evidence.

It’s like the whole world is throwing a big surprise party, and Andrew Sullivan is the only one who doesn’t know where or when. Please, no one tell him our big secret, it’s too much fun watching him on his wild Alaskan goose chase.

Elsewhere on the net:
Attacking Palin never gets old
Trig Trutherism! Andrew Sullivan Gets a Lifeline – Again!
Sullivan: MSM Should Die Because They Won’t Go Trig Troofer
“Questions that any sane person would ask”
Follow me on Twitter and Facebook

Every time I looked at Sully i felt pretty much the same way I felt about Michael Jackson. I remembered enjoying alot of his early work and thinking he was pretty good. Then I watched a steady decline into insanity until I couldn't even recognize the man I once admired. And all I could do is watch and marvel at how a man could deteriorate.

Sadly I see the same process playing out with Charles Johnson. Sigh.

Btw, this is totally the wrong approach to conspiracy nuttiness. my approach is mockery. like recently when faced with such a theory, i said (paraphrase): "And who exactly is running this conspiracy theory? The freemasons? The Illuminati? The Hare Club for Men? And are they in league with the saucer people?"

I mean if sully can't figure out what a massively silly conspiracy theory he is spinning, whereby millions of people work to hide something that really just isn't such a bad thing. i mean that is the crux of it, you know. it all depends on sully's fantasy view of conservatives where in his mind they think that somehow being a pregnant teenager is a "dark secret" requiring a massive coverup. All of which was imploded when Bristol actually did get pregnant and it turned out that most of the condemnation of Bristol came from so-called liberals like David Letterman. of course no one is happy with bristol for getting pregnant as an unwed teenager, but very few on the conservative side are going to hate Sarah because her daughter failed to live up to all of the ideals of conduct. Every parent of a teenager is reluctant to throw rocks if only because we all understand how easily it could happen to any of us.

Oh, and as a bonus, it also required daily kos idiots to post an old picture and say Bristol looked pregnant there. Have you made the stupid mistake of seeing a woman and going, "when is your baby coming?" only to be told "I'm not pregnant." At that moment you feel like a jerk, and you know what, you are one (and so was i, once). Well Sully and the kos kids have done a national version of the same thing. And we all know that teenage girls are often self-concious, so imagine how that must have felt to Bristol, to realize she had just enough belly fat for someone to think she was pregnant.

but what it also comes down to is that they want to try to deflate the wonderfully pro-life example that Sarah Palin has set by carryign her down syndrome child to term. This is why Trig is attacked so visciously, because they can't stand the silent moral rebuke to the so-called pro-choice movement.

Sad to say none of this stuff is surprising anymore. Sullivan has his enemies list and he's proven to be a very spiteful man.

And don't forget the conspiracy to make people think Willow Palin went to a Yankees game with her mom and dad, thus tricking Letterman into joking about A-Rod knocking her up. I mean, would you really put such a thing past a woman who would fake her own pregnancy?

(Man, trying to think like these dunces gives you a headache…)

I think your approach to debunking this conspiracy is absolutely correct. By suggesting that all these people who must have known have all kept quiet, the conspiracy suddenly holds no ground. As we know, by human nature alone, it would be impossible.

Same goes for the 9/11 conspiracies…there would have had to been literally hundreds if not thousands who were all "in on it" that have since kept their mouths shut.

Mockery of conspiracies is not always productive. Without first looking at all the facts of a specific phenomenon, one may just take the initial media reports and "correct" historical records for granted, instead of challenging them to arrive at the best truth.

I've said it before and I'll say it again: the left is honest-to-God fearful of Sarah Palin. They see how we (active Cons and Libertarians) react to her and they know that unlike the junk candidate McCain or any of our other also-ran old white guys, she could actually mobilize the Conservative base a la 1994. And yes, I'm including ol' Sully with the left. He Arlen Specter'd ages ago.

A scene from South Park, on the conspiracy to make us all believe in conspiracy theories:

Kyle: [after the conspiracy is blown] So who caused 9/11?
Stan: What do you mean? A bunch of pissed off Muslims.
Hardly Boy: Yeah, what are you, retarded?

Well, his approach is logically correct, except… do you really think logic will work on Sully at this point?

I think if you believe that such a thing is even possible or desirable as what Sully believes, you are so far removed from reality that logic is wasted on you.

I'll add one more thing. there is a point where the conspiracy theorists are so far gone that the conspiracy becomes unfalsifiable. every time you point out an argument or evidence to the contrary, its faked, or evidence it runs even deeper than they realized, etc. really its more like religion than anything else to them.

And of course it is a flattering little fantasy. it means the rest of us are stupid sheeple getting lied to while the few annointed know the real truth, including people who see through it like Sully. Its the glamour behind being a conspiracy nutter, you know?

Andrew Sullivan is the Perez Hilton of politics.

I've read a dozen posts about this by now, and none of the authors seem to have actually read Sullivan's post. He doesn't say one word about a conspiracy but wonders why a woman would fly across the continent for ten hours leaking amniotic fluid and then take the extra time to reach Wasilla. It's a question of judgment, not birth.

@Matt Osborne – It is very, very clear that Sullivan is talking about the birther claims, as in "Palin refused to cooperate in the slightest, and forbade anyone to cooperate with a story that was designed to vindicate her side of the story." The "story" at issue in the preceding sentence was "the conspiracy theories about Trig's birth." So while Sullivan was somewhat indirect, it is clear that his post is about the MSM's alleged refusal to investigate the claims that Sarah is Trig's grandmother, etc.

You have no idea how deep this conspiracy goes. You see, there really is no such thing as alaska. The whole claim that alaska exists is part of the conspiracy!

(in case it is not obvious, i am kidding; and isn't it sad that i can't be sure that it is obvious given how nutty some people really are?)

I knew it was conspiracy!

And WAIT! There IS an Alaska? Can you prove this? I've never been there…

Truthers,. wether Trig types or 911 morons share as a wiser person above pointed out, a self percieved special knowledge,. making them superior to us mere sheeplike mortals.

why they'll never ecant till their dying breath,.. it would mean they ain't so special, or very bright even.

My wife was pregnant three times,. a woman giving birth wants wht she wants,. and that is usually home comforts, her mom, close family,..

or would you want to be so far fom home if you were having a watermmelon pass through your system?

I apologise for all the typo's, I'm kind of hard on keyboards, and the keys stick some. I'm disabled now, and the meds,. I tend to drift into sleep easily,. and I've damaged the laptop abit. Knocked some keys off,.. My vision is not what it was either,..

But, I do promise to try harder.

I hate being imprecise.