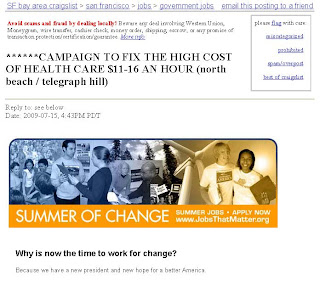 The Drudge Report links today to a Craigslist-San Francisco ad (right) by the Fund for the Public Interest, Inc. (formerly known as the Fund for Public Interest Research, Inc., referred to as The Fund), seeking people willing to help the “CAMPAIGN TO FIX THE HIGH COST OF HEALTH CARE $11-16 AN HOUR.” The advertisement states that a grassroots campaign is needed “because we have a new president and new hope for a better America.”

In 2006, The Fund was accused in a class action lawsuit in federal court in the Northern District of California of failing to comply with federal overtime wage laws by misclassifying canvas workers as “exempt” from the overtime laws. The Complaint is here, and the Answer filed by The Fund denying the accusations is here. The Motion for Collective Action detailing the accusations is here.

The case recently settled. While The Fund denied any wrongdoing, The Fund agreed to pay $2.15 million to past employees for unpaid wages and to cover the employees’ attorneys fees, which was represented to be approximately one-half of The Funds’ net worth. The document detailing the settlement is below. The settlement was approved on May 15, 2009.

I really like that a "grassroots" campaign is advertising for and paying their canvassers. And they called the Tea Parties astroturf. Hmmm…