CNN Falls For The Honduran Fauxtester

CNN Falls For The Honduran Fauxtester

As I posted previously, Reuters ran a staged photo of a bloodied Honduran protester (upper right). Contrary to the clear implication of the Reuters story, the protester was not bloodied from the protests, but as reported by Hunter Smith at Honduras Abandoned, the protester deliberately wiped blood on his shirt from the ground in order to get photographed. 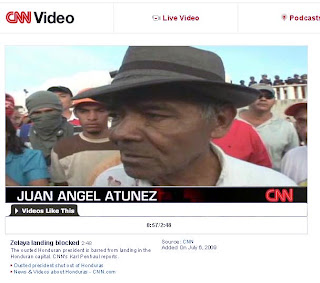 Now this same protester, identified as Juan Angel Atunez, has appeared in a CNN news report (lower right) by Karl Penhaul in a bloodied shirt claiming that a child died in his arms (h/t to Hunter again). From the official CNN transcript:

HUGO ORELLANA, HONDURAN RED CROSS OFFICIAL (through translator): We have one person dead, a man in his 20s, from a gunshot in the head. And eight people wounded.

PENHAUL: He says. Amid the violent clashes, protestors report more may have died. This man soak soaked in blood says a child died in his arms.

JUAN ANGEL ATUNEZ, PROTESTER (through translator): I ran over beside the boy to try and help him because I didn’t want him to die but he died.

It is unclear if a child died at the protests, as most reports state only one adult died. Regardless, Hunter’s first hand observation of Atunez wiping blood on himself prior to being photographed and videotaped shows that Atunez staged his appearance and story for dramatic effect, which both Reuters and CNN buying into it.

CNN had two teams on the ground. We were present throughout the march. CNN staff saw and heard the shooting. The blogger says he was not present at the time the shooting took place. We interviewed a bystander who said he had held a child who was dying. At no point in our interview did the witness allege he saw more than one victim. At the time there was confusion about the age of the victim, who was passed through the crowd, bleeding profusely from his fatal head wound. Many bystanders and journalists initially believed from the size and appearance of the body that the victim was quite young, consistent with the witness’s story.

CNN regrets that our report did not point out that we could not independently verify the man’s account. Note that CNN carefully reported the official Red Cross death tally of one, but included the assertions from protestors that the death toll may have been higher, as did the blogger.

I don't think they fell for anything. These are two institutions (Reuters and CNN) that are either openly anti-American (Reuters) or openly Leftist (CNN).

Obama and Chavez have both said that this is an illegitimate coup, so like the good little lackeys they are they go out to try to find evidence to support that assertion.

They know it was staged. They don't care.

If the Bloody Shirt was staged, you can bet that the "through translator" was made up as well.

Just because Obama and Chavez said it is an illegitimate coup, does not make it so. In Truth it was a LEGAL DEFENDING OF THEIR CONSTITUTION. Something Americans don't have the GUTS to stand up for anymore. Because Michael Jackson is so much more important. Sleeveless dresses are so much more important than our freedoms and protection of the best healthcare system in the world! Just because Biden and Obama claim it is broken, does not make it so either. But Chavez is in on it…the truth is coming…Obama is a tyrant, wants to be dictator, you better 'get' that point.

I agree with Jim–they don't care if the story wasn't true as long as it fits their Alinski type tactics.

As far as the Anti-America Obama and his sycophant MSM it is nothing but lies and more lies all of the time.

CNN and Reuters "fell" for nothing. They are active agents of the Obama regime, seeking to destroy the Honduran Constitutional democracy and install another Marxist Presidente for Life.

Thank you for exposing this. Those of us in Honduras have been shocked to the core at the slanted view at CNN (Español) coverage. A peace march of 70,000 people gets 3 seconds of coverage and a few thugs taunting the soldiers gets 20 minutes. From their coverage, you would think the whole country is under siege and it couldn't be further from the truth.

It's been very frustrating for us and it's confusing and disheartening to Hondurans. You can see their pleas to tell the truth at CNN's iReports and all over the internet.

CNN is using Chávez's Telesur coverage and a socialist reporter formerly married to a Sandanista. Her bias is so obvious that even the CNN announcer had to call her on it a couple of times.

I've been writing incessantly about the Honduran crisis from the perspective of an expat in Honduras. If Zelaya comes back, I'll probably be an ex-expat.

Here is another thing that possibly you can check out: On Sunday when Zelaya tried to come back for the second time, CNN (Esp.) carried a Telesur feed showing a telephone call supposedly from Zelaya, supposedly from the plane. It was NOT Zelaya. I knew it. My Honduran husband knew it. Everyone we talked to knew it. A friend who was watching with Zelaya's own cousin, said that the cousin said that it was not Zelaya.

I'd love if someone could it expose CNN for what they are doing. If a war starts in Honduras, I blame it on CNN.

Why do people constantly claim that Obama and Chavez are the only two people supporting zelaya? The reality of the situation is much larger then that. Groups that support Zelaya include the U.N., the world bank, the European Union, the Union of South American Nations, CARICOM. With so many people are supporting Zelaya it seems unfair to single out Obama and Chavez.

1. This is an American blog. Hence Obama.

2. Chavez printed the illegal ballots that Zelaya tried to use through mob tactics. Chavez supplied the plane that Zelaya used to fly back to Honduras. None of those entities that you mentioned are as involved with Zelaya as Chavez. Hence Chavez.

3. Obama has actually done more to support Zelaya than anyone else.

This was staged? You Chavez lover… http://www.twitpic.com/9fzyb