Bush Hid Ice Images From People Who Can’t Use Google

Bush Hid Ice Images From People Who Can’t Use Google 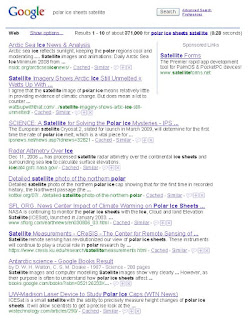 The global warming debate has entered the conspiracy-theory phase with this hysterical article at The Guardian: Revealed: the secret evidence of global warming Bush tried to hide.

Contrary to what the global-warming alarmists claim, however, there is scientific dispute over ice measurements.

What is not lacking, however, is satellite imagery. You see, U.S. spy satellites are not the only imaging satellites, and while spy satellites may be better at picking up a license plate number from a moving car, plenty of satellites can measure ice caps. But don’t take my word for it, just do a Google search (click image right).

So how about this headline: “Bush Hid Ice Images From People Who Can’t Use Google.”

Added: You don’t need a spy satellite to see the hypocrisy on the roof of “go green” expert Thomas L. Friedman’s mansion: 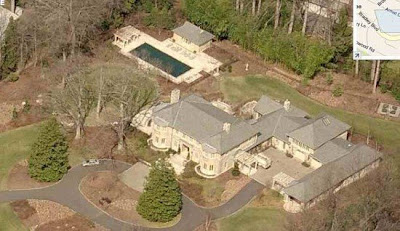 UPDATE 7-27-2009: Now Think Progress has joined the propoganda effort, Obama administration reveals evidence of global warming kept secret under Bush. Not only is the spin completely absurd and contradicted by publicly available information which shows widespread ice measurements (see comments below), as Macsmind points out, the released photos only compare ice levels in 2006 (a record level of ice) with 2007, even though up to 10 years of photos were taken.

If the photos are nothing you can't find from google, then you're accusing the Bush administration of illegally classifying documents. Since you read the article, though, you saw that the photos do, indeed, have something that's missing elsewhere – resolution to one square meter.

Why do you need resolution to one square meter to see ice that stretches over hundreds or thousand of miles? And maybe the classification was routine to protect satellite capabilities, or presumptively classified because of the source, not part of a conspiracy. Think about it. Scientists go out by foot, boat, vehicle to measure ice; scientific satellites take pictures of Earth all the time; Google Earth and other civilian satellites can pick up the car in your driveway. But bad ole Bush tried to keep it all from us. Really.

Friedman's gasbag emissions in print luckily cannot affect the atmosphere. Otherwise, the CO2 levels everywhere would rise dramatically because Tommy the Trendy F-man is a hilarious example of libtard nuttiness [Timothy above also qualifies, as a mini-TF-man hisself.]

I am no climate scientist and you shouldn't pretend to be. The climate scientists say that the photos fill in a missing piece of evidence that they couldn't get before. If you get credentials in climatology and devote your life to this study then we should maybe listen to you. Until then, you're a lawyer. Really.

Maybe I'm reading this wrong, but Timothy is apparently not familiar with the phrase "tongue-in-cheek"…

The Guardian has long been deep in the tank for Obama and the global-warming fraud, so it's no surprise they'd write this piece of Trutherism just as Waxman-Markey finds itself in deep trouble in the Senate and public opinion.

@Timothy, you don't need to be a climate scientist, just use common sense and a search engine, as in this post: "Yahoo! Releases 1m-Resolution Imagery for Entire Continental US" (http://www.gearthblog.com/blog/archives/2006/04/yahoo_releases.html). The release date, April 2006. Just do a search for "one-meter satellite resolution" and you will see that one meter resolution is no big deal. The Guardian article quotes one person as saying the photos provide a "dimension that's been missing." Why it was missing given all the civilian capabilities is hard to understand, but to blame a Bush conspiracy is absurd. Really.

Remember when the scientific community:

1) Well, claimed the sun revolved around the earth;

My googleearth has lovely images of the sea ice up there in Barrow. I guess the next liberal argument will be George Bush is a sinister fiend obfuscating facts about global warming… but just too dumb to do it right.

btw…wonder if Guardian readers will enlarge that sea ice photo and read the little blue box? Clearly the Guardian reporters did not.

Particularly interesting, the statement which says: "Observation of sea ice position reveal considerable year to year variability". Or what about the statement, "Sea ice forms along the coast in the winter and generally breaks away or melts by mid-July."? The July 2007 photo seems to be of sea ice that has broken away or melted….heeey…

Could it be the July 2006 photo is the more unusual image…one of a particularly cool year up there in Barrow?

Bill, the scientist you are dismissing here is from NASA's Goddard Center. Do you really think he doesn't know what data has not been previously available? And, as I said before, if you really do think the photos have nothing new, then you're saying Bush illegally classified those documents.

Rio, the article says that the ice has been depleted each year since 2006. The danger for us is that this causes the sun's heat to be absorbed in the black water instead if reflected by the white ice.

Well, of course he was hiding it! The photo depicts lots and lots of Halliburton drilling platforms!

The problem with conspiracy theorists is that each piece of evidence which contradicts their theory is used as proof that the conspiracy is really, really effective. Even rudimentary internet searches reveals huge amounts of data on sea ice off of Barrow, Alaska; repeated claims based on satellite images, airplane flyovers, and observations, that the sea ice was shrinking; and many civilian sources of information. The fact that some classified spy satellite images allegedly also show the same thing does not mean that the spy satellite photos were concealed for some ulterior motive, which was the argument in The Guardian article, and many of the blogs which have picked up the story.

I realize that history is inconvenient, but in 2006 the Bush administration sought protection for polar bears on the basis of shrinking Alaskan sea ice. So if the conspiracy theorists are correct, then Bush concealed evidence of shrinking sea ice even though the concealed evidence supported his position, for the purpose of … oh forget it, I'm not good at conspiracy theory. Here is a quote from a WaPo article: "Polar bears are in jeopardy and need stronger government protection because of melting Arctic sea ice related to global warming, the Bush administration said Wednesday." (http://www.washingtonpost.com/wp-dyn/content/article/2006/12/27/AR2006122700432.html)

Shh, Bill. The denialists on this blog will think that Bush actually intervened on climate change.

But you and I know that the story you cite is disingenuous because you're fully aware that Bush circumvented the recommendations of his staff (the recommendations you cite in the Wash Post article) and actually eased restrictions that protected polar bears. See, e.g., http://www.nytimes.com/2008/12/12/science/earth/12species.html.

But it's not a conspiracy, Bill. It's called chain of command.

Well, it must be a really good conspiracy, because the links you provide don't quite say what you say they say. The NY Times link has to do with policy changes at the Interior Dept. to avoid having the listing of some species as endangered species being used as an excuse to halt construction projects far away (e.g., protecting polar bears requires halting a power plant in Missouri), and the Technology Review link has to do with a directive as to who would be designated the official spokesperson for administration policy and did not prohibit a scientist from speaking on the subject (http://www.nytimes.com/2007/03/08/washington/08polar.html).

So…. the conspiracy was that Bush withheld satellite data which supported his policy on polar bears even though many then and now dispute whether polar bears should be considered endangered, which data was available in similar though not identical format elsewhere through several different means, so that the concealment ….

The twist you are trying to put on that story is unjustified.