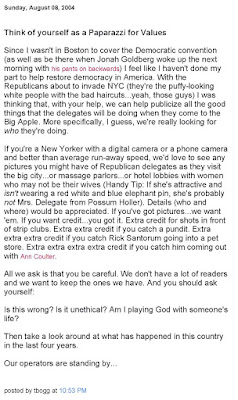 Conservative blogger Ed Whelan “outed” an anonymous liberal blogger who penned under the name Publius. Turns out Publius is a junior law professor who was afraid that revealing his identity would jeopardize his career prospects and family relationships. While Publius worried about the reaction of conservatives in academia, career concerns are much more likely and damaging when conservatives blog, since law academia overwhelmingly is liberal.

One of Publius’ defenders, and harsh critic of Whelan, is “TBogg” at FireDogLake, whose real name long ago was posted. TBogg specializes in mocking people who disagree with him (like Condoleeza Rice whom he referred to as “Brown Sugar“) by distorting his opponents’ views, and encouraging others to do the same.

So it is particularly ironic to see TBogg worrying about someone being subjected to ridicule because their real name was exposed:

Bitter out-of-power wingnut welfare recipient Ed Whelan fucks up explaining a joke, gets called out on it, and then goes Full Metal Asshole …. That is to say that publius was “irresponsible” in that he criticized Whelan and, for that crime, Whelan wants to fuck with publius’ life. Why else out him?

Worse yet, TBogg has been a proponent of exposing the private lives of people, at least people who disagree with him politically. In 2004, TBogg urged people in New York City to take photos of delegates to the Republican National Convention in the hope of catching people in embarrassing positions [note, the “Ann Coulter” link was in original TBogg post, I encourage you to click on it to see the level of TBogg’s blogging]:

Since I wasn’t in Boston to cover the Democratic convention (as well as be there when Jonah Goldberg woke up the next morning with his pants on backwards) I feel like I haven’t done my part to help restore democracy in America. With the Republicans about to invade NYC (they’re the puffy-looking white people with the bad haircuts…yeah, those guys) I was thinking that, with your help, we can help publicize all the good things that the delegates will be doing when they come to the Big Apple. More specifically, I guess, we’re really looking for who they’re doing.

All we ask is that you be careful. We don’t have a lot of readers and we want to keep the ones we have. And you should ask yourself:

Is this wrong? Is it unethical? Am I playing God with someone’s life?

Then take a look around at what has happened in this country in the last four years.

Our operators are standing by…

TBogg’s call for embarrassing photos of Republicans was picked up by AmericaBlog, which gained its claim to fame by outing gay Republicans.

There have been legitimate critics and supporters of Whelan. The criticisms ring less hollow coming from people who have not devoted their lives to cheapening online conduct and outing others.

I don't like outing anybody for any reason whatsoever. I disapprove the outing of gay Republicans who publicly denounce homosexuality or push for laws that diminish their rights, which puts me at odds with some liberal blogs (cf. AMERICAblog).

If privacy is to have any value whatsoever, it includes the option to hide from view certain activities: Going to the racetrack to bet on the ponies. Purchasing Hustler magazine. Attending a church of a marginal religion. Etc.

Outing is part of a Puritan mindset that insists that everything be done on the public stage. Everything. So that the crowd can weigh in on this-or-that personal quirk or unpopular viewpoint that the subject exhibits. It's actually a primitive (and juvenile) social phenomenon that we can do without.

A lot of false equivalences here.

Public figures who act as moral scolds while hypocritically engaging in the forbidden conduct deserve to be outed. If they want their privacy, then live a private life, or alternatively, don't be a hypocrite. You do not, under a claim of privacy, get the privilege of making other's lives miserable while doing what you condemn.

Being an psuedonomynous blogger does not make one a public figure, nor is it inconsistent or hypocritical with writing a political blog. Supposedly what matters in the content of the writing — not knowing the identity of the writer simply prevents the usual personal attacks as rebuttal.

Valuable comments. Whelan made a mistake, IMO – or at any rate did something I think most of us instinctively would have refrained from doing. He took the easy way out to get back at "publius," and the result reflects poorly on him and makes things a little bit harder for those who value his work and generally stand with him. On the other hand, as you show, what he did was fairly trivial: It's not like publius was an undercover agent or whistleblower. He was just one of a thousand – or is it several million? – self-righteous anonymous internet nobodies, who now probably stands to benefit from undeserved attention more than he stands to suffer from it.

Neoconservatives on the airwaves say any damn thing they please, including encourage people to go out and shoot abortion doctors, support torture and so on, but the minute someone disagrees with them on a blog, or "bites their ankles" they have a big whiney cry and run to mama screaming that person's name and address.

I may disapprove of what you say anonymously but I will defend your right to say it anonymously.

Wait, I think I get it.. Outing people is only wrong when a left leaning blogger encourages pictures of GOP delegates to be taken. Which isn't exactly an "outing" since names aren't being published. But when an actual outing, where the name of an anonymous blogger is released, happens, then it's all good because it was done by a rightwing blogger.

ummmhh, beg your pardon. "Neoconservative (that all-round slur)…say any damn thing they please, including encourage people to go out and shoot abortion doctors . . ." That's a pretty serious charge there, buster. Got any links to back it up? And did you get your panties bunched over, say Progressive/Stalinist/fascist Rachel Maddow ("on the airwaves" and "say(ing) any damn thing" she pleases) when she encouraged shooting President Bush?

I'm betting not. "Moon(bat) Rattled is pretty symptomatic of the problem. I'd take him/her more seriously (anonymous or not, since I am also) if s/he could be a bit more even-handed.

So, until Rattled comes forth with evidence of similar high dudgeon towards Left types, I'll take it as a given that the above posting is not argument so much as peurile venting.

Whelan did not need to out publius.

SO, please list for us the "Neoconservatives on the airwaves" who "encourage people to go out and shoot abortion doctors". And provide the quotes, please.

Woah! You have some serious moonbattery coming your way, William!

dmbeaster, were all the folks in NYC for the GOP convention "public figures?" No? The h*ll you say! And you had slightly anonymous blogger telling others to go out and basically harass the Republicans. Seems like perfect equivalence.

Hmm, tas, I seem to remember a time when you lefties thought it was hilarious to publish the home addresses of Conservative pundits, such as Michelle Malkin, putting their families in danger. Are you OK with that?

When Jonah Goldberg woke up with his pants on backward?

Talk about a cheap shot. Who can imagine any circumstance in which Jonah Goldberg would have occasion to take his pants off?

At least, who can imagine it without uncontrollable nausea.

It was unfair to the Afghan Hound to be likened to Coulter.

What an odd method of self-empowerment among the left-tending contributors here: Apparently, they feel empowered by their ability to demean themselves, in demeaning others, without fear of retribution. It's the same pattern that finally drove Whelan offer new resources to their insatiable narcissistic appetites.

If anyone doubts that it can get ugly out on the web they didn't go any further than the above comments to know better. Those who would defend the sanctity of taking cheap shots anonymously are not exactly standing on the high ground.

Highly amusing that his fellow wingnuts are by & large condamning Whelan. Pity they lacked the stones to do likewise when Malkin was stalking a child or dropping dox on peace-protesters.

The exception only proves the rule: the tribe of Rove tend to follow in his slimy footsteps when it comes to dirty tricks – the name "Valerie Plame" comes to mind.

Sorry, but throughout this debate here and on other sites, there seems to be some regrettable confluence of the concepts of "privacy" and "anonymity." If you do not behave in a manner consistent with an expectation of privacy, don't be surprised when others engage you in a public debate, and attempt to find out all they can about you. Such attempts are a legitimate and acknowledged percursor to multiple forms of criticism, both literary and legal.

Contra to some of the previous posters; repeatedly and vociferously engaging in a public debate does indeed make one a public figure.

Attempting anonymity while engaging in public debate is futile, not to mention dishonest. I cannot believe a law professor who is also internet-savvy enough to be a prolific blogger is unaware of the ease with which others can discern his identity.

And as a side note; no one who has defended Publius' "right" to anonymity has put forward a legitimate reason why Mr. Whelan should shield Mr. Blevins' identity from the public, when that identity – dishonest posts, shoddy scholarship and all – is instructive in informing the reader regarding Mr. Blevins' credibility, or lack thereof.

Also, morally and not legally speaking, we who blog are welcome to anonymity or pseudo-anonymity so long as we don't attack someone else in public. Private e-mails I would argue are an exception. However, once you attack, and make a habit of attacking people in a public forum, other citizens have the right to know who they are speaking to. It is no different than verbally assaulting someone in public wearing a mask.

Hmmm, let's see, "I seem to remember a time when you lefties thought it was hilarious to publish the home addresses of Conservative pundits, such as Michelle Malkin," Really, would you be able to provide evidence of that? Was it before or after Malkin "outed" a high school kid who disagreed with her stance, which of course was both necessary and perfectly fine, well, for her , anyway.
Asto Whelan, we have a commenter who sucks down Whelan's assertions of "dishonest posts, shoddy scholarship and all…" And Jonathan, you know that's correct how exactly? Because Whelan , whom Volokh skewered (yes, he did) says so? Weak tea at best. But you just go ahead and drink it on down.

I'm flattered you read my comment and took the time to respond.

I must correct you, however: the assertions of "dishonest posts, shoddy scholarship …" are mine, not Mr. Whelan's. You are, of course, free to disagree with my assessments, but based on what I've read of Mr. Blevens oeuvre they seem fair and accurate.

But in responding, I'm afraid you didn't respond to or refute my actual point: that entrance via publication into the public domain necessarily removes an expectation of anonymity (and a certain level of privacy, for that matter).

Nor have you explained why Mr. Whelan has a moral obligation to shield Mr. Blevens' anonymity (not that this is your responsibility to so explain, but I think an intellectually honest person might attempt it)