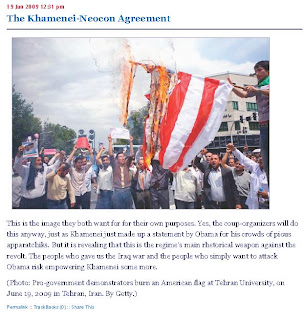 To read Andrew Sullivan’s posts on the suppression of the opposition in Iran, you would think American “NeoCons” (whoever they may be) were in the streets swinging batons from the backs of motorcycles, trashing the library at Tehran University, and breaking into homes in pursuit of demonstrators.

Sullivan is not alone, as many other bloggers have been affected by NeoCon Derangement Syndrome, but Sullivan by far is the most depraved, as the screen shot to the right demonstrates.

The election fraud, the demonstrations, the crack down, the shouts of Death to America, the beatings, the green banners carried in the streets, the millions on the march … it’s all an American NeoCon conspiracy.

And Supreme Leader Ayatollah Ali Khameini, he just got off the phone taking orders from Dick Cheney. Or was it Karl Rove? Or the Head of the Mormon church?

The leader of this vast conspiracy is actually Trig Palin.

I knocked up Trig Palin.

If it were up to Bill Kristol, John Bolton and a host of other neoconservatives and right-wing commentators egged on by the constant drum-beat of Fox News, America would have bombed suspected nuclear installations in Iran months ago.

I remember bets were being place whether of not President Bush would bomb Iran by the end of his term.

And of course there was "Bomb, bomb, bomb, Iran" John McCain.

"Derangement" is when a person illusions facts that aren't true… that's hardly the case here.

"For that matter, we might consider countering this act of Iranian aggression with a military strike against Iranian nuclear facilities. Why wait?"

wow ur all wrong

I'm a neoconjooblogger. But I have an alibi. I was at a meeting of the elders, on Jewpiter [I have a note (no … really)].

This post has been linked for the HOT5 Daily 6/20/2009, at The Unreligious Right

Hmm, if you haven't seen it, this joker at HuffPo gives Sullivan a run for his money in NDS – http://www.huffingtonpost.com/frank-schaeffer/the-real-lesson-of-iran_b_218359.html