Paul Krugman proved, once again, why he has no credibility. In a column in today’s New York Times, titled “The Big Hate,” Krugman blames conservatives for the shooting at the Holocaust Museum because conservatives have had the audacity to harshly criticize the Obama administration.

Krugman picks a few pieces of sentences from various commentators to argue that conservatives are “winding up” domestic terrorists. True to form, Krugman ignores any evidence that cuts against his argument, such as that the museum shooter had a history of violence dating back at least to 1981, and was a neo-Nazi who hated conservatives and Fox News.

[added] Krugman also places blame on these same commentators for the shooting of Dr. George Tiller. Yet there has been no evidence that the shooter was motivated by what anyone else said. The fact that someone may have criticized Tiller, even harshly, does not logically establish evidence of causation. Mixing up mere association (i.e., both the killer and commentators criticized Tiller) with causation (the commentators caused the killer to act) is a common logical fallacy of which Krugman must be aware.

While Krugman places the blame on conservatives for the museum [and Tiller] shooter[s], Krugman fails to consider the implications of his own logic. Since Krugman has been one of the harshest critics of the Bush policies (as continued by the Obama administration), then using his own logic Krugman himself is “winding up” the next Islamist terrorist attack. Or maybe Krugman wound up the last Islamist attack, just days before the museum shooting, when a convert to Islam upset over U.S. policies in Iraq and Afghanistan killed an Army recruiter.

Will Krugman accept the responsibility he seeks to impose on others? Don’t count on it. The best thing about playing the “hate card” is that consistency is not required.

UPDATE: Not suprisingly, Eugene Robinson at the Washington Post plays the “hate card” today as well:

What we don’t know is whether all the blast-furnace rhetoric coming from the right is giving validation and encouragement to some confused, angry man or woman with a rifle or a truck full of fertilizer — the next “lone wolf,” preparing to howl.

Interesting how neither Krugman nor Robinson applies his (il)logic to the shooting of the Army recruiter by someone who fed off of the anti-Bush rhetoric espoused by people like …. Krugman and Robinson. Of course, “we don’t know” if there were any causal link, but let’s smear all anti-Bush commentators just to be fair.

UPDATE No. 2: Let me see if I have the logic straight. Harshly criticising someone makes one morally if not legally responsible for the violent actions of those who share similar beliefs, and who may have heard the criticism. So Krugman and Robinson must be liable for the lunatics referred to in the search below: 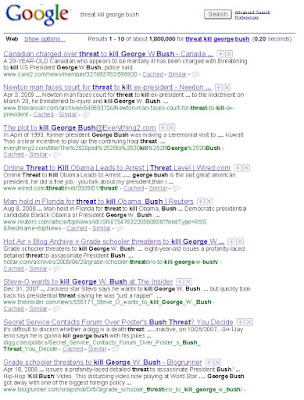 For years liberals have stoked hatred of conservatives by far-left nutjobs like von Drumm. Liberals told everyone that republicans were going to destroy Social Security and waged wars of profit. I had friends who were, at one time, level-headed Democrats, who believed that Bush was going to fake an incident with Iran as an excuse to go to war.

And they are still stoking that hatred. I think Rush is in far more danger than Obama is. Who's approval ratings are worse?

Listening to liberals and conservatives screaming at each other provides an absolute understanding of how large groups of people can become brainwashed disciples, absolutely and irretrievably sold on the elitist supremacy of their own worldview. The same phenomenon is too frequently seen in the hatred and horror of the world’s religious cultural wars, Protestants versus Catholics in Ireland, Catholics against Eastern Orthodox in Croatia and Serbia, Christians of all stripes killing Muslims across the old Yugoslavia, Tutsis killing Hutus in Rwanda, Muslims killing Jews and Christians wherever, Jews committing ethnic cleansing in Palestine. All of them are armed with perfect arguments straight from ‘God’ and completely and absolutely convinced of the moral righteousness of their own cause and the consummate heinousness of their enemies.

The partisan media on both sides in the United States are fanning these flames of our own cultural war. Of that there is no doubt. They ably serve their partisan public. Meantime, the more disturbed and mentally unstable act out as they always will. The significance today is that, on both sides, the hatred has reached a level that even the conduct of nut cases is seized in order to fuel the flames.

Straight up, Paul Krugman is a complete loon. Seriously though, he literally is mentally disturbed. If you have ever had the pleasure of watching his appearances in cable news programs, he kind of reminds you of Chief Insp. Charles Dreyfus from the Pink Panther. He has that tick in his eye and that gaze as if he is short one knife in the silverware drawer. He has a sick obsession to push for an such an obscene government spending and taxes that he knows will push the country the bankruptcy. His tone when he talks about this is the pleasure he gets in seeing everyone be miserable. It's as if it is his way of getting even with the world for his years as a child when he got picked on in the playground while in grade school. He seriously is a sicko.

Von Brunn was a frequent poster on the far-rightwing hate site "Free Republic".

His hateful screed "Obama is Missing" is signed by him, IN HIS FULL NAME, James

It is still up on that site… check it out before it's removed.

His Free Republic nick was "wannabegeek"… read his other rightwing hate posts.

I don't know why the MSM is not covering this.

Krugman, the "economist" also says that we don't need to worry about inflation, even as Obama quadruples Bush's deficit and doubles the supply of M1.

Why does anyone listen to this Marxist ass wipe?

Check it out before they are removed.

Or we could say: von Brunn once complained to a friend that his electric bill was too high, and his friend agreed. Ergo, the friend is guilty of von Brunn's crimes.

But this is what passes for liberal logic nowadays.

That's funny JohnJ… you create a logical fallacy and go on to treat it as if it was true.

You want logic? Ok, here you go say me for example, I'm involved in animal rescue.

I take in and rehabilitate animals that have been abandoned and mistreated… a PETA guy.

I have the time, property and resources to to do so.

Do you think a guy like me who believes that animals need to be treated humanely, a supporter of PETA would be welcomed on "Free Republic" John?

Ever hear of the saying "Birds of a feather flock together"?

It's not just von Brunn's hateful "Obama is Missing" screed.

From the link provided (better look at it soon) look at all the positive, like-minded "Freeper" comments on his dozens of Free Republic posts, k?

So alternatively dave I guess we should condemn whole groups of people whose politics we disagree with, when one who doesn't agree with the politics, does something morally and legally awful.

Should we round up all the people who post on Free Republic or who visit the site? Send them to reeducation camps? Let Keith Olberman waterboard them maybe?

Freedom of association means something, or is supposed to, even in America. If our current President is not a hater by virtue of his association with a Church that preached hatred, then the people who post on Free Republic are not inciters of killing by their accidental association with Von Brunn. This in no way excuses Von Brunn. It just means we can't condemn people as a group for what a single individual chooses to do. Last time I checked, that's how this country is supposed to work.

Or is that only true when one agrees with the politics involved?

In Liberal's minds, they think that the rational response to their complete control of government is gunfire. Implicit in their paranoid projection is

1) that's what they would do except they don't own enough guns outside of the drug trade.

2) that they know full well that they are destroying the USA.

3) that the Homeland Security brief that painted conservatives as terrorists will be used to disarm conservative Americans. The next step is push us into a handful of marginalized states far from the corridors of power and money. Sure, you'll be free, but you'll be broke and weak.