The first reference to this conspiracy theory that I can find, and a driving force behind its spread, is a website called Charting Stocks. 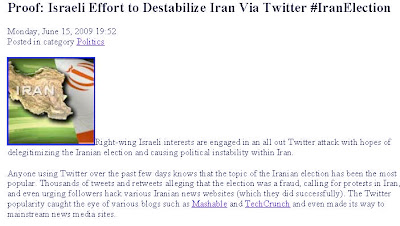 The core of the theory is that soon after the Iranian election, Twitter was filled with allegations of fraud and calls to contest the election. The author asserts that three Twitter accounts were responsible for thousands of tweets (although the author does not state what percentage of total Iran-related tweets were by these three accounts). The conspiracy is revealed, according to the author, by his discovery that all three Twitter accounts were mentioned in a Jerusalem Post Blog post on June 14 about how Twitter, Facebook and bloggers were posting minute-by-minute updates about the situation in Iran. The Post mentioned the three Twitter accounts as being from Iran.

But Charting Stocks discovered, it says, that the three Twitter accounts were not Iranian. From this discovery, the author reached the conclusion that there was proof that “Right-wing Israeli interests are engaged in an all out Twitter attack with hopes of delegitimizing the Iranian election and causing political instability within Iran.”

Were these legitimate Iranian people or the works of a propaganda machine? I became curious and decided to investigate the origins of the information. In doing so, I narrowed it down to a handful of people who have accounted for 30,000 Iran related tweets in the past few days. Each of them had some striking similarities –
1. They each created their twitter accounts on Saturday June 13th.
2. Each had extremely high number of Tweets since creating their profiles.
3. “IranElection” was each of their most popular keyword.
4. With some very small exceptions, each were posting in ENGLISH.
5. Half of them had the exact same profile photo.
6. Each had thousands of followers, with only a few friends. Most of their friends were EACH OTHER.

Why were these tweets in English? Why were all of these profiles OBSESSED with Iran? It became obvious that this was the work of a team of people with an interest in destabilizing Iran. The profiles are phonies and were created with the sole intention of destabilizing Iran and effecting public opinion as to the legitimacy of Iran’s election.

This line of reasoning, as others have pointed out, makes no sense. Of course anyone concerned with election fraud in Iran likely would open a Twitter account devoted to that subject the day after the election. Such Twitterers were obsessed with Iran just like everyone else on the internet, so they were not unique.

The author makes it seem that the three Twitter accounts dominated the internet, but does not state what percentage these three accounts constituted of all Twitterers or tweets (my guess, a tiny percentage, if even measurable). Why in English, if they were Iranian? Well, if they were Israeli, why not in Hebrew? If Israelis can use English to tweet, why can’t Iranians?

The common use of “IranElection” as a keyword (Tag in Twitter parlance) is not surprising; that keyword is the most common on Twitter (at least as of yesterday). The author also demonstrates nothing posted by these three accounts that differed in any significant manner from the information being spread by the Iranian opposition itself about the elections, or by major newspapers and non-Israeli blogs.

But the conspiracy theory really falls down when one considers the necessary conclusions from the theory. The allegations of election fraud by hundreds of thousands of Iranians, including by Mir Hussein Musavi, would have to be a creation of supposed Israeli tweets. But allegations of election “irregularities” were made by Musavi on the day of the election, June 12, before these Twitter accounts were created. That night and into June 13, the entire blogosphere and mainstream media erupted with reports of election fraud, so if there were a conspiracy, everyone was in on it. And so on, and so on.

None of this, however, will detract from the conspiracy theory, anymore so than the proof that al–Qaeda carried out the 9/11 hijackings distracts from claims that Israel was behind 9/11. These conspiracies are, in this sense, incapable of disproof because every contrary fact is used as evidence that the conspiracy was really, really good.

Are social networking sources subject to suspicion? Of course, as almost every report citing such sources states. Do or could governments pose as someone else? Sure, and there are such allegations against the government of Iran for using Twitter to spread false information. (Ironically, one source lists Charting Stocks as being a suspected Iranian government disinformation affiliate, something I have no way of verifying or not.)

But why single out three accounts just because they were linked in a single Jerusalem Post Blog post? Why the “obsession” with proving something (the three accounts were fake) which even if true had no impact on any facts on the ground in Iran, and were mere drops in an ocean of information about Iran? It surely isn’t anti-Semitism, as the author of Charting Stocks insists he is “half Jewish”:

Disclaimer: Before I get attacked as being an Anti-Semite, you should know that I am half Jewish. Alternatively, I hope that people do not misinterpret this as some “JEWISH” conspiracy. It isn’t. These are the workings of the extreme right wing of Israeli politics. They have their own Bush’s and Cheney’s there too.

Conspiracy theorists don’t need any other reasons. The conspiracy is enough.

Update: For interesting statistics on the surge in Twitter use in Iran check out A Look at Twitter in Iran and Tweets coming out of Iran are retweeted an average of 57.8 times.

Politics can get rough. But like you said, this doesn't change the facts on the ground in Iran. And it doesn't erase the brutality of this tyrant and his regime.

And to top it off, the new leftist president is doing the exact same thing.

I doubt that Mousavi and Rafsanjani are taking their cues from Jeruselem, and that should be enough to quell conspiracy rumors. Alas, it's not since radical Islamists and their left-wing hangers-on are prepared to believe any horseshit that attaches blame to Jews.

Crazy people! It's an insult to the Iranians and their bravery and righteous anger in the face of an uphill battle, and plays into the hands of the Republican Guard and Ayatollah (who want to claim that nothing's happening behind the curtain). I and so many others have too many friends from Iran to believe these kind of conspiracy theories, and too much intelligece to buy the hype.

Its probably Iranian state employees and such, posting such drivel.

There are two things happening. The internal tensions existant in Iran and the way they are being exploited in the USA and by whom. It is in the second sphere where the possibility of a neocon "conspiracy" occurs… Not in Iran.

Btw, you forgot the rules of style set down by IMAO. When you refer to jews controlling things, they should be called the "joooooos!"

Whenever I hear some Israeli conspiracy theory, I always think of the joke where the Israeli is like, "Whenever I want to cheer myself up I read the Arab newspapers, because according to them, we're controlling everything…"

I don't think anyone even approaching sane thinks claims like this are anything but hogwash just like the 9/11 claims.